Bombers Fall to 1-6 as QB Carousel Spins ‘Round 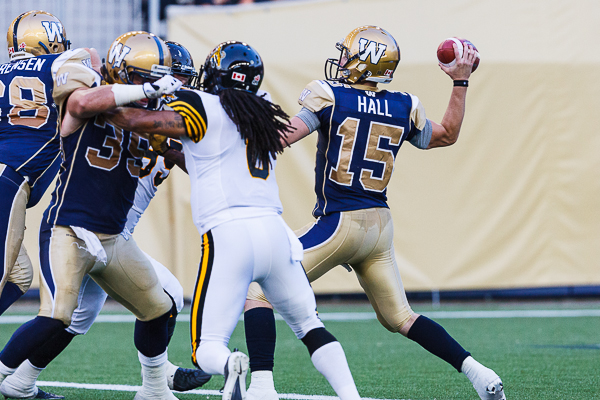 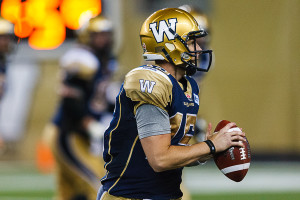 WINNIPEG — Following a tumultuous week of change from the organizational top all the way down to the place kicker, the Winnipeg Blue Bombers followed up with a rough outing against the Hamilton Tiger-Cats in front of a near-sellout crowd of 32,409 at Investors Group Field on Friday night. The 37-18 loss drops the club to 1-6 on the season, sitting themselves securely in the CFL’s East Division basement.

“The record speaks for itself,” said Bombers cornerback Brandon Stewart. “We all know we need to do a little bit more on all sides of the ball. We’ve just got to work harder. We’ve got to do better. We just need to play more as a team.”

It was a lot of the same from the majority of the dressing room, as the deflated team looks for any modicum of consistent success as the struggles persist on offence, defence, and special teams.

Winnipeg started their third different quarterback in four games Friday night, as CFL rookie Max Hall got his first career start. The 27-year-old showed flashes, especially in the first half, but missed time in the second half before returning due to a bruised sternum.

“I thought he had some real positive moments,” said Winnipeg head coach Tim Burke of Hall’s performance, going 18-of-30 for 241 yards with a touchdown, two interceptions, and a lost fumble. “He was pretty accurate on his passes. He moved the ball. There was a point where he was a little bit off, and then we found out that he had been hit and was hurting a little bit, and that’s when we put Buck (Pierce) in.”

So the quarterback carousel endures for another week as Burke says he will continue to delegate the starting quarterback call to the team’s offensive staff, headed by coordinator Gary Crowton.

And while Crowton and defensive coordinator Casey Creehan’s job tilt and tip on the line, Burke knows his fate is also hanging in the balance.

“It doesn’t matter if you’re the head coach or the quality control guy, it hurts any way you look at it,” added Burke, who is in his first full season as a head football coach after decades in assistant and coordinator roles. “When I dreamed about it I dreamed of winning, and championships and all that. I go down the hallway and I look at the winningest (Blue Bombers) coaches and their percentage and I don’t even want to look at my percentage. It’s not a lot of fun losing, I’ll put it that way.”

Winnipeg has a chance to possibly salvage a scrap of their season and earn some instant redemption as they complete their home-and-home with Hamilton next Saturday afternoon in Guelph, Ontario.