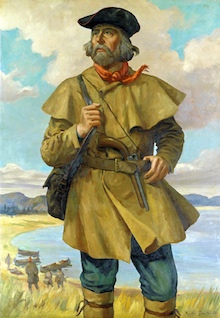 To mark the 275th anniversary of the construction of Fort Rouge, a reenactment of a French-Canadian explorer’s arrival to The Forks is planned for today.

The Culture Days event was originally scheduled for Saturday, but was postponed due to weather.

A contingent of soldiers and Cree warriors will announce the arrival by musket fire from the canoes and the shore. La Vérendrye will be greeted on shore by Cree reenactors who will invite him to meet with them. La Vérendrye and a Cree speaker will reenact a conversation held on September 24, 1738, as detailed in La Vérendrye’s Journals.

Following the arrival, there will be military drill and musket demonstrations, a mini Fort Rouge exhibit, traditional trades such as blacksmithing, woodworking and 18th century tailoring and sewing near the Assiniboine River pedestrian bridge.