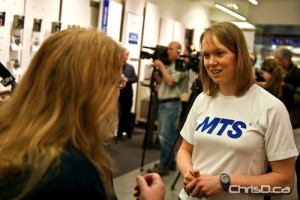 Manitoba speed skating Olympian Cindy Klassen is helping to open a new exhibit at the Manitoba Sports Hall of Fame on Wednesday.

Just in time for the opening of the Sochi Olympic Games, the Olympic-theme exhibit will take visitors on a journey through time as they explore significant photos and artifacts from Manitoba’s best winter Olympians.

The Olympic Exhibit presented by Johnston Group will be on display at the Manitoba Sports Hall of Fame (located in the Sport for Life Centre at 145 Pacific Avenue) from January 29 to June 8, 2014. Entrance admission for the exhibit is $5 for adults and $3 for seniors (55+) and children (12 and under).

Klassen will join Don Pincock, chair of the Manitoba Sports Hall of Fame, for the opening at 11:30 a.m.