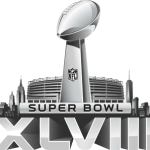 Super Bowl XLVIII will be played this Sunday. (WIKIPEDIA IMAGE)

While many might not know it, the biggest event in professional football this weekend has a Winnipeg connection.

Winnipeg-born Jason George is an assistant coach to the Denver Broncos who will play the Seattle Seahawks in the Super Bowl this weekend. On Friday, Mayor Sam Katz publicly wished George luck.

“The Super Bowl is the highest level of professional football in the US – it is a rare honour to be able to extend best wishes to one of our own taking part,” wrote Katz. “It gives me great pride to know that Mr. George’s passion for the sport and coaching career began in Winnipeg, and that he still maintains close ties to the community.”

George, who played for the St. Vital Mustangs before eventually moving on to coach the St. Paul’s High School Crusaders and then being hired by the University of Kansas. From there, he moved on to the NFL, where he’s worked with teams like the Jacksonville Jaguars and the Broncos.