Normal to Below Normal Flood Risk in Manitoba This Spring 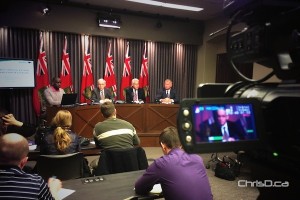 Officials with the province provide an update on this year’s flood situation to the media on Friday, February 28, 2014. (CHRISD.CA)

Manitoba is in for a relatively quiet flood season, with minimal flooding predicted in the province this spring.

Being dependent largely on the weather, Emergency Measures Minister Steve Ashton said the calm outlook will be based on whether there’s a large amount of precipitation between now and when the snow begins to melt.

“Everybody in Manitoba knows the expression ‘it’s a dry cold.’ The reality is in many areas of the province, we’ve had lots of snow, but it’s a dry snow,” Ashton said.

Areas in the western part of the province, however, may be subject to localized flooding. Ashton also said that a delayed thaw and colder March could contribute to overland flooding in some areas.

Around The Pas and the Souris River, the risk of flooding has a greater potential due to well-above normal snowpack in the region, combined with increased soil moisture content.

Conditions on the Red River show flows are normal to near normal for this time of year, whereas on the Assiniboine River, flows are slightly above normal due to releases from the Shellmouth Reservoir.

Newly-hired chief flood forecaster Dr. Fisaha Unduche said earlier this week that despite the mass accumulation of snow, he expects a normal to below normal flood risk this season.

Crews are also continuing work to prevent ice jams by utilizing the Amphibex machines and ice cutters on the north Red, Assiniboine, Icelandic, Brokenhead and Fisher rivers, as well as the Portage Diversion.