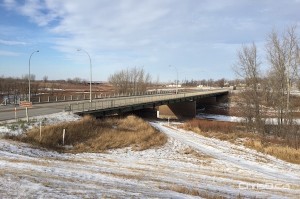 A view of the Morris Bridge from the community’s ring dike on Friday, November 21, 2014. (CHRISD.CA)

WINNIPEG — It’s a common occurrence during flood season in Manitoba — the closure of Highway 75.

The province hopes to alleviate some of those transportation delays and reroutes by raising two bridges and sections of the highway near Morris. The construction will keep the critical commercial route to the U.S. open for business during major floods.

“After careful analysis of water flows and the regional geography, the government will rebuild two major bridges and raise parts of PTH 75 to reduce the impact of floods along the highway through Morris,” said Selinger. “A construction project of this magnitude will be built in phases over the next five years to minimize disruption to the town of Morris while getting the flood protection done as soon as possible.”

The plan calls for a new, higher bridge over the Morris River at the north end of the town and a new, higher Plum River Bridge south of Morris near St. Jean Baptiste. The bridge at Morris is the most prone to flooding and is the primary cause of closures on Highway 75.

Approximately 26 km of highway north and south of Morris will be raised to keep the road above flood levels.

The project comes at a cost of $200 million and is expected to take five years to complete.