Winnipeg Basks in Above Seasonal Temperatures 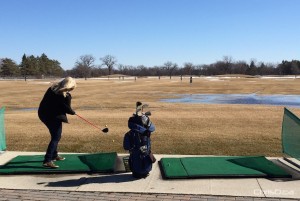 A woman hits a ball at the driving range at Shooters Family Golf Centre on Saturday, March 14, 2015. (CHRISD.CA)

WINNIPEG — With the temperature rising to a forecast high of 14°C on Saturday, Winnipeggers couldn’t wait to get outside and take advantage of it.

Shooters Family Golf Centre on Main Street saw a steady flow of visitors to its driving range with their first operating day of the season.

Owner Guido Cerasani said it’s not the earliest the driving range has opened, but the second week of March is still considerably early for them.

Cerasani said his business has been receiving phone calls from eager golfers ever since the sun came out and the snow began to melt.

Elsewhere across the city, the Bridge Drive-In on Jubilee Avenue opened for ice cream lovers, while Sargent Sundae on Portage opened up Friday.

Sunday looks to be a pleasant repeat weather-wise with temperatures predicted to reach a balmy 15°C.