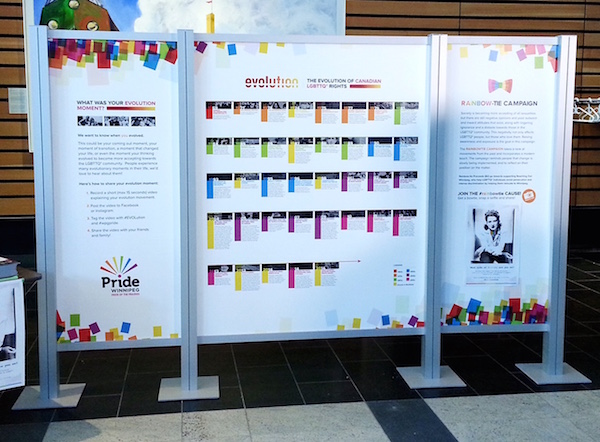 The Evolution Exhibit contains a timeline of the evolution of LGBTTQ* rights in Canada, starting from the decriminalization of homosexuality in 1969 to the present day struggles of transphobia.

The exhibit showcases one of the core activities involved with LGBTTQ* rights, The Pride Movement. Pride Winnipeg is hoping this exhibit will shed more light on the history of the LGBTTQ* movement and how the Pride Festival begun. This exhibit contains the history of the Pride movement in an effort to answer a question that is frequently asked: “Why do you need a parade?”

“The Pride movement is approaching its 50th birthday in 2019 and it’s important that people know the history of the Pride Movement as it’s a part of our human rights culture,” says Pride Winnipeg president Jonathan Niemczak. “Unfortunately the LGBTTQ* rights movement is not taught in schools. Until it is we must take it upon ourselves to educate our community and the general public on the movement and the key milestones that have resulted in the liberty we enjoy today as LGBTTQ* Canadians.

People visiting the exhibit can also donate $2.00 by purchasing a paper bowtie through the “Rainbow-Tie Campaign” to sponsor a LGBTTQ* refugee.

The exhibit will then move on to the Millennium Library next Thursday.