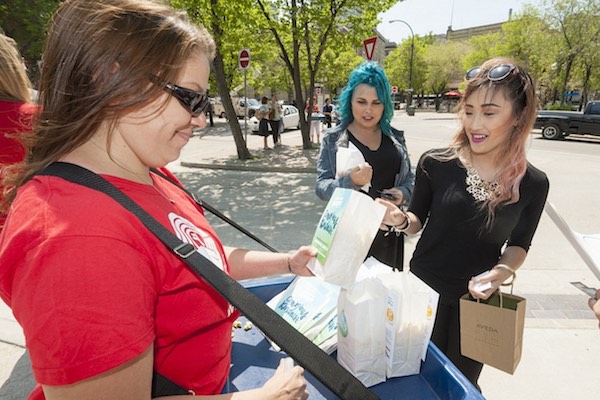 The United Way of Winnipeg spread cheer and goodies to unsuspecting people on their lunch breaks in downtown Winnipeg on Wednesday, May 27, 2015. (DOUG LITTLE PHOTO)

WINNIPEG — Unsuspecting people downtown over the lunch hour were treated to kindness to mark the 50th anniversary of the United Way of Winnipeg.

As part of Winnipeg Wednesdays, the organization treated lunch-goers to free cookies and popcorn, high-fives and hugs.

The event launched United Way of Winnipeg’s countdown to its Conscious Kindness day on June 3.

“Everyone has heard of random acts of kindness, and probably seen or experienced them. It’s not an overstatement to say that kindness changes lives,” said Jan Sanderson, a member of United Way of Winnipeg’s board of trustees.

“We already know Winnipeggers are kind and generous, and just a simple act can change someone’s day, or even their life. We think Winnipeg can raise the bar by being consciously kind.”

United Way is encouraging Winnipeggers to pay it forward by going online and pledging now to do something kind on Wednesday, June 3.

Those who make a pledge are entered to win of 50 special edition vintage United Way logo T-shirts. The goal is to reach 1965 or more pledges of kind acts for Conscious Kindness, which United Way of Winnipeg hopes to make an annual event.