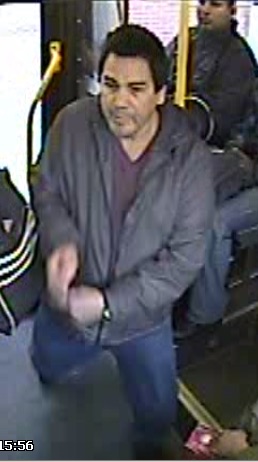 This man is accused of spitting on a woman and assaulting her on board a Winnipeg Transit bus on October 8. (WPS / HANDOUT)

Police are looking for a man who allegedly assaulted a woman on a Winnipeg Transit bus on October 8.

The 21-year-old woman was riding on the bus at around 1:30 p.m. in the area of Marion Street when she felt something on her head. She was talking on her cell phone at the time and turned around to notice a man had spit on her. He then began yelling and grabbed her hair, later causing her an upper body injury.

The victim eventually made her way home and contacted police.

The suspect is described as aboriginal in appearance, between the ages of 45 and 50, and approximately 5’8″ tall.