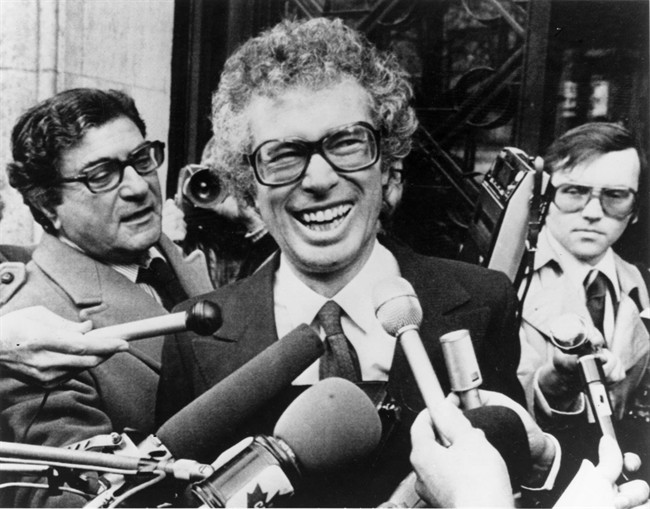 Ken Taylor, Canadian Ambassador to Iran, laughs as he answers questions during a meeting with journalists outside the Canadian Embassy in Paris in this Jan. 31, 1980 file photo. Taylor sheltered six U.S. citizens during the 1979 Iranian hostage crisis. (THE CANADIAN PRESS/AP)

We lost a quiet Canadian hero this week. Ken Taylor died at the age of 81. 36 years ago, he was Canada’s Ambassador to Iran in the midst of the revolution that ousted the Shah, and replaced him with the Ayatollah.

Taylor was a career diplomat, raised and educated in Calgary. At our embassy in Tehran, he sheltered six Americans who had barely escaped with their lives from the American Embassy not far away. Ken Taylor was celebrated as the master of the Canadian Caper. Not long after it happened, Gordon Pinsent portrayed him in a movie. I saw Taylor on the street in Ottawa then, and he was signing autographs for women and children.

If he were an American, Ken Taylor might have parlayed it all into a career in politics. No doubt both the Liberals and Tories tried to woo him to run in this country, but he wisely said NO. He did head up Canada’s diplomatic mission in New York for a while – the job that Jean Chretien later gave to Pamela Wallin.

The Americans celebrated Ken Taylor a lot more than we did, and perhaps that’s not surprising. Canada is not all that comfortable with heroes, unless they maybe have a hockey stick in their hands. Our diplomats are hugely important, and they don’t generally get rewarded the way they should.

A couple of years ago, Hollywood took another run at the Canadian Caper story, with a much bigger budget and an impressive cast that included Ben Affleck and Alan Arkin. It was called Argo and it won some big Oscars including Best Picture of the Year.

Victor Garber played Ken Taylor, and the filmmakers tried to suggest that the Canadian ambassador was a relatively minor player in the whole adventure, and that the CIA deserved most of the glory. Ken Taylor spoke up about it, and he was supported by Jimmy Carter who just happened to be President when it all went down.

Thanks, Ken for being a hero with a Maple Leaf, in an ugly scary world.

← Previous: Big Game Issues at the Forefront of 'Wild at Heart' Fundraiser Next: Road Closures in Effect for WFPS Half Marathon →
Tags: Canada