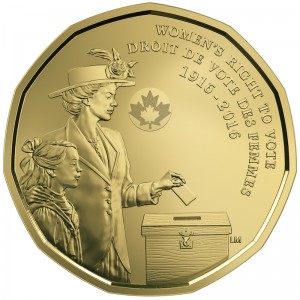 A new one-dollar circulation coin is marking the 100th anniversary of a women’s right to vote.

The Royal Canadian Mint unveiled the coin at the Canadian Museum for Human Rights in Winnipeg on Tuesday, with a similar ceremony in Ottawa including Prime Minister Justin Trudeau.

“It is especially fitting that this coin was produced in Winnipeg, in the province where women first won the right to vote in 1916,” said Sandra Hanington, president and CEO of the Royal Canadian Mint.

Canadian artist Laura McGaw designed the coin, which features a 1916-era depiction of woman and child, with the woman casting a ballot as the child looks on.

Five million of the coins have been produced and are available nationwide as of today. Limited quantities are also available by ordering online at Mint.ca.