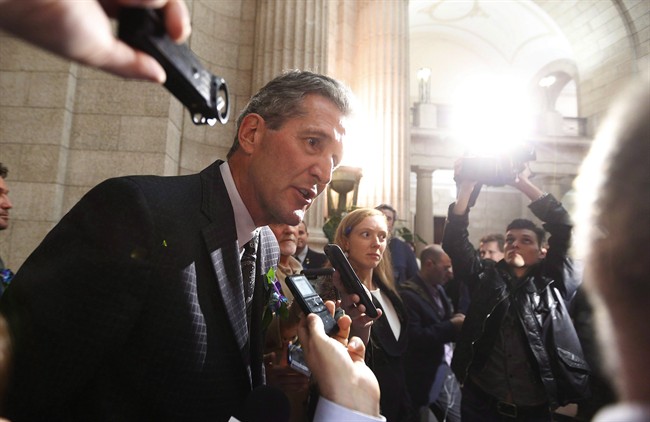 Manitoba Leader of the Opposition Brian Pallister speaks to media after the speech from the throne at the Manitoba Legislature on Monday, November 16, 2015. Pallister says his party would reduce the record number of kids in care by improving the provincial economy. (THE CANADIAN PRESS/John Woods)

WINNIPEG – In the lead-up to the April 19 Manitoba election, The Canadian Press is running a series of stories called Ad-Curracy, in which we look at the facts behind claims made in political advertisements.

This instalment focuses on a Progressive Conservative ad, which has aired on television and is hosted on the party’s YouTube channel.

The 30-second ad focuses on the NDP government’s decision in 2013 to raise the provincial sales tax to eight per cent from seven, and warns that the New Democrats will raise it again to nine or 10 per cent if re-elected.

Did Selinger say prior to the last election he would not raise the sales tax?

Did Selinger force the tax increase through without a referendum?

Yes, but the courts sided with him. The province’s balanced budget law requires a referendum before any increase to sales, income or corporate payroll taxes. The NDP introduced a bill to suspend that provision to raise the sales tax without a referendum. The Tories challenged the move in court and a Court of Queen’s Bench ruled the government was within its right to change the referendum law.

Was it the largest tax increase in Manitoba history?

Questionable. If you adjust for inflation, the introduction of the provincial sales tax in 1967 (at a rate of five per cent) appears much bigger. The rate in essence went from zero to five per cent.

The Tory ad accuses Selinger of planning to raise the tax again, based on a 2014 story by The Canadian Press about the Finance Department examining a number of options when it increased the sales tax, including a nine per cent rate. That contradicted comments from then-finance minister Stan Struthers, who said nothing higher than eight per cent was ever considered or analyzed.

It’s unclear how serious the nine per cent option was. The relevant documents were kept secret under the province’s freedom-of-information law. A report from the ombudsman said finance officials told him the nine per cent rate was looked at “solely in the context of providing comparators, which is a common practice in financial research and analysis.”

The Tories say Selinger cannot afford to keep his campaign promises without another tax hike. Selinger has repeatedly said he will not raise the sales tax again. He has defended the 2013 tax increase as necessary to fund much-needed infrastructure projects and boost the economy during a global slowdown.