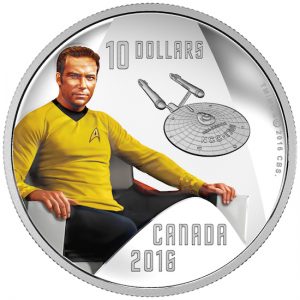 A new set of coins depicting the legendary Star Trek franchise has been launched by the Royal Canadian Mint.

The coins celebrate the 50th anniversary of “Star Trek: The Original Series.”

A $10 coloured silver coin picturing the commander of U.S.S. Enterprise, Captain James Tiberius Kirk, was unveiled by William Shatner, the Canadian-born actor who made this character a household name, and Mint president and CEO Sandra Hanington at an event hosted by the Canada Aviation and Space Museum on Thursday.

Other characters will be available on the following dates: