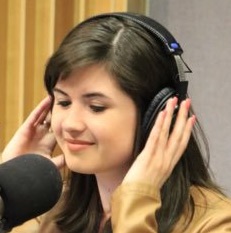 The Red River College Creative Communications grad is making her solo play-by-play broadcast booth debut during the third inning of the Winnipeg Goldeyes game at Shaw Park on Saturday.

The Fish host the Fargo-Moorhead RedHawks as Doiron calls the shots from up top.

“She has a bright future in the industry, and we are extremely proud to call her a part of our family,” said Goldeyes’ broadcaster Steve Schuster.

“This is not only a monumental achievement for Danielle, but a significant milestone for Winnipeggers, Canadians, and young women in general with career aspirations in sports media.”

Doiron has been a media relations assistant with the Fish for two seasons, and also has experience working with the Jets, Blue Bombers, and Moose. This summer she has also added studio host and board operator to her Goldeyes resume.

Last off season, she was the recipient of the Jack Matheson Award from the Manitoba Sports Writers and Sportscasters Association.