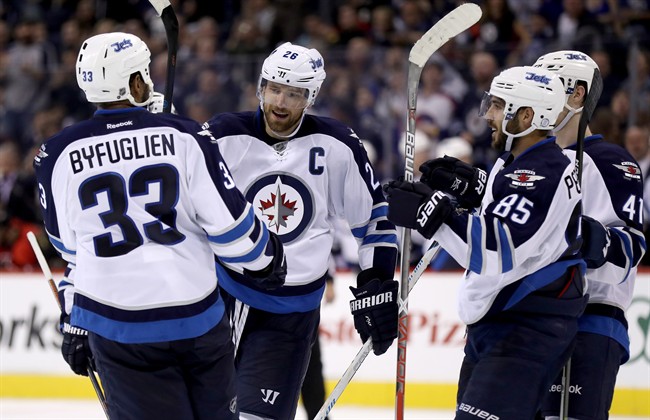 WINNIPEG – Every time Kyle Connor has stepped on the ice in a game for the Winnipeg Jets, he’s left his mark.

The highly touted rookie forward scored the deciding goal on the power play as the Jets won their fourth straight exhibition game with a 4-2 victory over the Ottawa Senators on Monday.

The 19-year-old has played three pre-season games and scored a goal in each one, something he admits has boosted his confidence. He also hopes he’s catching the coaches’ attention.

“I think I can show them my game,” said Connor, a finalist for the Hobey Baker award while with the University of Michigan last season. “I play with lots of pace, an ability to make plays around me and I think I’ve showed I can finish as well.”

Connor, who left Michigan to turn pro after his freshman season, broke a 2-2 tie at 7:02 of the third period. After pausing at the side of the net, he flipped the puck high and off goalie Andrew Hammond.

Senators forward Max McCormick had been in the penalty box on a double minor for roughing.

It was Winnipeg’s (4-1-0) ninth power-play goal out of the 17 times they’ve scored this pre-season. Their power-play unit is scoring 36 per cent of the time with the man advantage (9 for 27).

Nikolaj Ehlers was credited with an empty-net goal with five seconds left in the game when he was tripped up by Matt Bartkowski on a breakaway.

Mark Scheifele had a power-play goal and Jets captain Blake Wheeler also scored and added an assist. Defenceman Dustin Byfuglien and forward Mathieu Perreault each had a pair of assists. Michael Hutchinson made 27 saves for the Jets.

Hammond stopped 29 of the 32 shots he faced for Ottawa (2-1-2), which got goals from Tom Pyatt, with a two-man advantage, and Ryan Dzingel.

“We want to play quick, and I thought for the most part we did,” Hammond said. “It just seems like it was another step in the right direction as far as getting that much closer to having the system down pat.

“I mean, the result isn’t what you want, but I think overall the process of the 60 minutes is us moving in the right direction.”

Winnipeg forward Drew Stafford left the game late in the first period with an upper-body injury after crashing into the boards following a hit. Jets head coach Paul Maurice said Stafford would undergo tests, but he didn’t think the injury was “overly significant.”

Dzingel scored on a wraparound at 3:59 of the second period, the first point for the speedy winger in four exhibition games.

Scheifele evened it 1-1 when Ehlers saw him at the side of the net and sent him a pass he put past Hammond at 10:49.

Ottawa quickly regained the lead with Pyatt’s goal, scored 12 seconds in a two-man advantage with Jets defencemen Brenden Kichton and Byfuglien in the penalty box.

But with six seconds left in the middle period, Byfuglien redeemed himself when he sent a cross-ice pass to Wheeler, who tied the game 2-2 with a blast from the middle of the circle.

It was the final pre-season home game for the Jets, who finish their seven exhibition matches with trips to Edmonton on Thursday and Minnesota on Saturday.

The Senators wrap up their pre-season with a neutral-site game against Toronto on Tuesday in Saskatoon and will host Buffalo on Friday.