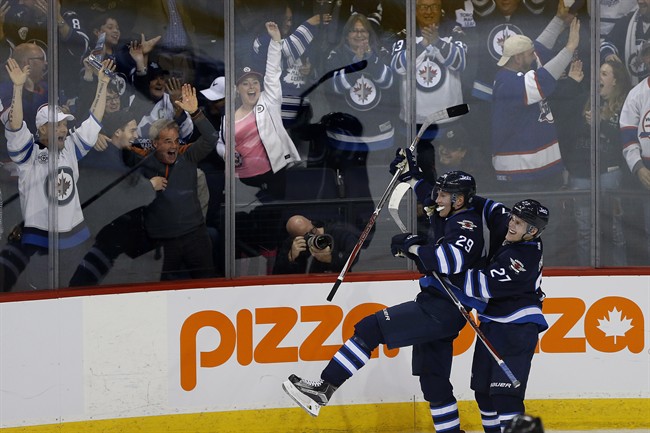 WINNIPEG – Patrik Laine showed some flash on the ice Wednesday and a sense of humour off of it.

The Jets rookie scored a hat trick, including the winner at 2:40 of overtime, as Winnipeg overcame a four-goal deficit to beat the Toronto Maple Leafs 5-4.

“I think it was just a normal regular-season game,” Laine said with a chuckle.

It was anything but for the second-overall pick in this year’s NHL draft.

Laine scored the winner right after Leafs rookie Auston Matthews, the draft’s No. 1 selection, was stopped by Winnipeg goaltender Michael Hutchinson at the other end of the ice.

Jets defenceman Dustin Byfuglien grabbed the puck and sent it up to Laine, who skated in and fired a high shot past Toronto goalie Frederik Andersen.

A big save from @mhutch34 leads to magic from @PatrikLaine29.

The fans at MTS Centre got into the first NHL showdown of the highly touted rookies, chanting “Laine better.”

Laine appreciated the support, but didn’t get into his own assessment of Matthews, who had scored four goals in Toronto’s season-opening 5-4 overtime loss to Ottawa.

“Yeah, I heard something and that sounds pretty good,” Laine said of the biased home fans. “That’s their opinion and I’m not going to say anything about that.”

Matthews heard the chants, too.

“It’s a great atmosphere,” Matthews said. “Obviously, Winnipeg is a great hockey city so that’s what you get when you play these types of teams. You got to block it out and just have fun with it.”

Laine’s hat trick gives him four goals and one assist in four games so far this season. Matthews recorded his first assist of the year and now also has five points but in three games.

"It was an amazing feeling." @PatrikLaine29 on his first career hat trick, and the fans inside @mtscentre. pic.twitter.com/zB0yt2cR87

“We’ve just seen brilliance from both of them in the first four games of the season. Lucky for Winnipeg fans and lucky for Toronto fans we get to watch two great young players.”

Winnipeg was down 4-0 early in the second period before getting goals from defenceman Tyler Myers late in the second, Laine 1:00 into the third and Mark Scheifele, who made it 4-3 at 6:05 of the third period.

Laine then tied it 4-4 on the power play with 55 seconds left in the third period with Maple Leafs defenceman Morgan Rielly in the penalty box for cross-checking Scheifele, who had a pair of assists along with Byfuglien.

“That was a big play for them and I’ll take blame for that one,” Rielly said.

Winnipeg’s comeback was a bit of deja vu.

In their opening game of the season against Carolina, the Jets (2-2-0) were down 4-1 early in the third period and came back to win 5-4 in overtime.

Nazem Kadri scored a pair of goals for Toronto while Connor Carrick and William Nylander also found the back of the net for the Leafs (1-0-2). Nylander added an assist.

Hutchinson made 36 saves for Winnipeg and Andersen stopped 29-of-34 shots for Toronto.

Carrick opened the game’s scoring at 6:46 of the first period off a rebound and Kadri made it 2-0 with a low shot from the slot at 16:12.

Toronto then used a pair of power-play goals to make it 4-0 early in the second.

With a two-man advantage for 1:04 early in the second period, Nylander scored with two seconds left on the five-on-three at 6:47. Kadri followed up with his second goal of the game eight seconds later.

“Any time you’re up, you want to shut the game down and you want to take care of it and keep playing,” Maple Leafs head coach Mike Babcock said.

“But I thought we didn’t stay with it the same way and I thought they got better in the third, and in the end we get what we get.”

Winnipeg’s next game is Sunday’s outdoor Heritage Classic against the Edmonton Oilers. The Leafs quickly travel to Minnesota for a game against the Wild on Thursday.