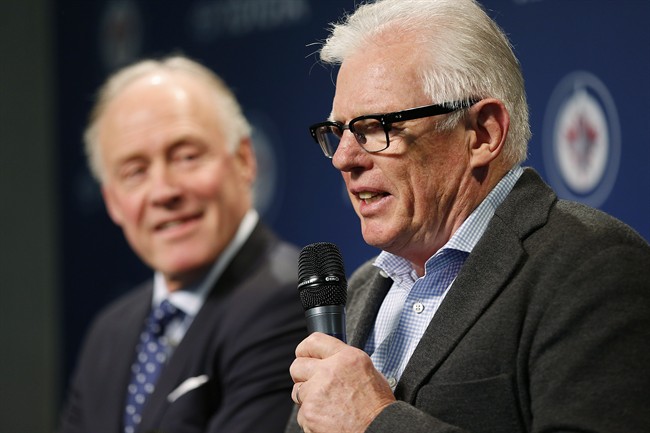 Former Winnipeg Jets’ Anders Hedberg (L) and Ulf Nilsson speak to media about their induction into the Winnipeg Jets Hall of Fame with Bobby Hull in Winnipeg on Wednesday, October 19, 2016. Bobby Hull did not attend the induction ceremony. (THE CANADIAN PRESS/John Woods)

WINNIPEG – The Winnipeg Jets inducted the first three players into their Hall of Fame Wednesday, but superstar Bobby Hull was missing.

The 77-year-old Hull had told the NHL club last month that he wouldn’t be joining former linemates Anders Hedberg and Ulf Nilsson for the ceremony because of “personal reasons.”

It was an absence felt by the pair of Swedes, who made up the trio known as the ‘Hot Line’ for their scoring prowess in the World Hockey Association in the 1970s.

Prior to the on-ice ceremony before Wednesday’s game between the Jets and Toronto Maple Leafs, Nilsson said he talked to Hull about why he wasn’t joining them.

“He’s upset about some things that have been brought up from the past,” Nilsson, 66, said of Hull.

After the Jets announced Hull was going into the Hall of Fame, some in Winnipeg questioned whether he was a suitable candidate given previous allegations of domestic abuse.

The pair were asked what role off-ice issues should have in someone going into a Hall of Fame.

In Hull’s case, it should have “no bearing whatsoever,” Hedberg said.

“I think personalities and dedication and all those type of things will play in, should play in,” Hedberg, 65, said. “But in this case, Bobby Hull is such an important, important figure in bringing hockey to Winnipeg…

“Bobby Hull should be in the hockey Hall of Fame of the Winnipeg Jets.”

Hull played 15 seasons with the NHL’s Chicago Blackhawks before the Jets lured him to join their team for the WHA’s first season in 1972-73. He inked a $2.75-million contract, including a $1-million bonus other WHA teams pitched in to pay.

Hedberg and Nilsson came over from Sweden in 1974 and were trailblazers for European players. They spent four seasons with the Jets until both signed with the NHL’s New York Rangers after the ’77-78 WHA season.

When the WHA disbanded in 1979, Hull went on to play 18 games with the NHL Jets in ’79-80 and nine with the Hartford Whalers the same season.

Hedberg recalled the first time he, Nilsson and Hull practised together. They clicked and he knew right away “it would work.”

The pair got a loud cheer from the crowd when they were introduced and a video of the trio’s on-ice talents was shown.

"This is the past, present, and future in a few days in Winnipeg. How can you beat that?"