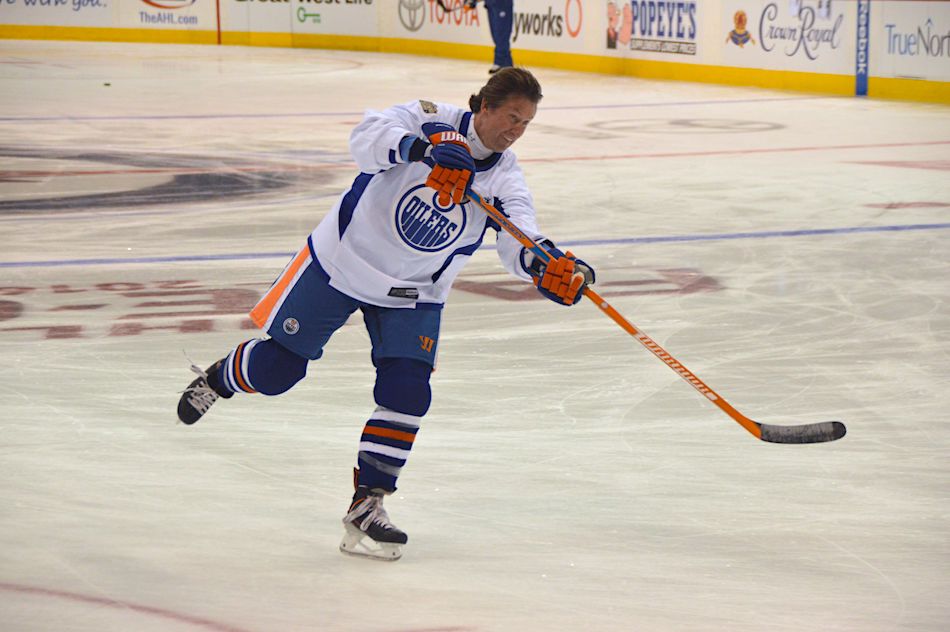 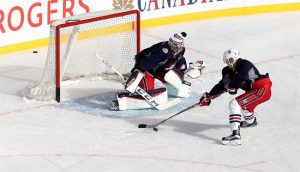 Winnipeg Jets’ Patrik Laine (29) fires a shot on goaltender Connor Hellebuyck (37) during the teams practice at Investors Group Field in Winnipeg, Saturday, October 22, 2016. The Jets will play the Edmonton Oilers at the NHL Heritage Classic Sunday. (THE CANADIAN PRESS/Trevor Hagan)

WINNIPEG – When Wayne Gretzky says he’s looking forward to seeing Jets rookie Patrik Laine play in person, you know the hockey world is pumped up about the potential of the Finnish forward.

Gretzky is in Winnipeg for the Tim Hortons NHL Heritage Classic, where he’ll captain the Edmonton Oilers alumni team against the Jets old-timers on Saturday at Investors Group Field.

The scoring legend will join other fans on Sunday to watch the regular-season NHL outdoor game between the Jets and Oilers.

“I haven’t seen him play live yet. I’m looking forward to that Sunday,” Gretzky said of Laine after the alumni teams practised Friday at MTS Centre.

“The other night when he scored three goals is great for the Jets and wonderful for the city. He’s bringing an excitement and an enthusiasm to the organization and the city.”

The 18-year-old Laine notched a hat trick Wednesday, including the tying goal and overtime winner, in a 5-4 victory against the Toronto Maple Leafs. He now has four goals and one assist in four games.

“And you’ve got to love to score. I loved to score. And you can tell that kid (Laine) loves to score.”

The spotlight on Laine, the second-overall pick in this year’s NHL draft, is especially intense in his homeland.

“People in Finland, they are crazy about Laine at the moment,” said Jalonen, who’s been with the paper since 1983. “They want to know everything about him.”

Jalonen is trying to satisfy that curiosity.

In his first 10 days in Winnipeg, he filed 85 stories, with about 60 of those keying on Laine, he said. The rest have been about other Finnish NHLers and alumni.

“It got so crazy last summer that women’s magazines, they wanted to interview (Laine) at his home, everywhere, about his girlfriend and everything,” Jalonen said.

“Somebody even offered to write a book about him already. His agent said no to everything.”

The attention on Laine is more extreme these days with the Internet, he said.

“He’s handling this situation very well,” Jalonen said of Laine. “He has a lot of self-confidence, but he’s down to earth. The only thing he’s interested in is to help his team.”

The foreign media spotlight on Laine has also included a Vancouver-based reporter for a Finnish broadcasting company and a Finnish reporter from Toronto who writes for a different newspaper and sports magazine in Finland.

Laine is taking it all in stride.

“Of course, everybody’s interested in how I’m doing here, the Finnish people,” Laine said matter-of-factly. “It’s good to get them a little bit of information from here.”

If anyone knows about handling the media glare, it’s Selanne.

The “Finnish Flash” is playing in the alumni game and has talked to Laine about the NHL and the city where he got his own start at age 22.

“I was really hoping that he’s going to have a good start to get the confidence going right away and that’s what has happened,” said Selanne, 46, who was given the key to the city by Winnipeg Mayor Brian Bowman on Friday.

“That’s awesome. The whole city’s excited, all the Finns are excited. That’s a great thing.”

Selanne left his mark in Winnipeg when he scored league rookie records of 76 goals and 132 points in 84 games. He was traded to Anaheim in February 1996 and retired in 2014 after 1,451 NHL games.

This summer, he began a scoring hockey academy in Finland and taught 16-year-old forwards from his country’s junior national team.

He said scoring is his “passion” and he didn’t dismiss the possibility Laine could follow in his rookie footsteps if he stays healthy and continues to play on Winnipeg’s top line.

“I think he has all the tools to score 76 or whatever, a lot of goals,” Selanne said. “But it’s not going to be easy.

“You get only one chance, a one-year chance. But those are just numbers. I’m just excited that he’s doing good and I’m going to follow him very closely.”