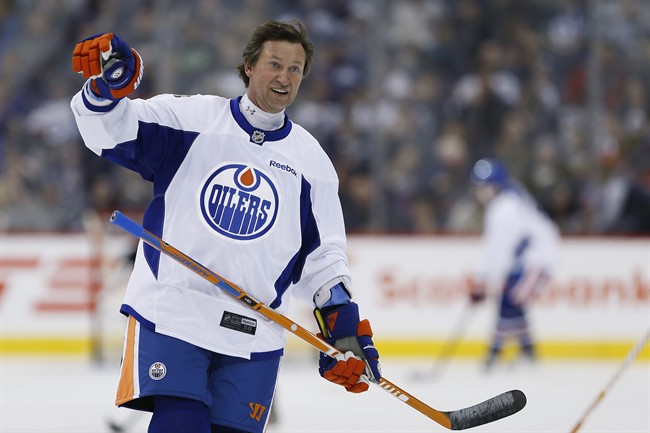 Former Edmonton Oilers Wayne Gretzky waves to the crowd during a practice for the NHL’s Heritage Classic Alumni game in Winnipeg on Friday, October 21, 2016. Winnipeg will host games between current and alumni players from the Winnipeg Jets and Edmonton Oilers this weekend. (THE CANADIAN PRESS/John Woods)

WINNIPEG – Wayne Gretzky says he doesn’t lace up his skates much these days.

The Great One will make a rare return to the ice Saturday to play alongside other former Edmonton Oilers greats against Winnipeg Jets alumni as part of the Heritage Classic weekend.

“I mean, I skate once a year. I just really never find the energy, the enthusiasm to grab my equipment and say ‘Oh, I’m going to play pickup hockey,'” Gretzky told reporters Friday.

Golf is more Gretzky’s game now, and he has left his competitive drive behind him, for the most part.

The outdoor alumni game is the second for Gretzky. He laced up for a similar Heritage Classic matchup in 2003 between former Oilers and Montreal Canadiens.

He is playing again because the game raises money for charities. It’s also a chance to see some of his former teammates from the Oilers dynasty of the 1980s — Mark Messier, Jari Kurri, Paul Coffey and more.

And facing the Jets — longtime rivals in the World Hockey Association and National Hockey League — is special, he said. The Oilers repeatedly pounded the Jets in the playoffs in the 1980s, but Gretzky said they were always tough opponents.

“The games and the series were closer than the scores would indicate,” he said.

Dale Hawerchuk, the Jets’ captain during the Oilers dynasty era who is leading the Jets alumni team Saturday, remembers facing a “powerhouse” every time the former Smythe division rivals met.

“The challenge to beat the Edmonton Oilers was incredible … and we beat them a few times, we just couldn’t get through them in the playoffs,” Hawerchuk said.

“That’s why you sign up to play this game — to play with the best against the best, and they were definitely the best in that decade.”

Players on both sides are quick to point out, however, that their performance has slowed with age.

“The pressure is on from my kids that I better do something constructive tomorrow. I don’t know what that is,” joked Ed Olczyk, who played with the Jets in the early 1990s.

The Great One is also cautioning fans that he might not be quite as great on the ice anymore.

“It’s always fun to help people and be charitable, but don’t anticipate the hockey being wonderful. We’re not that good anymore,” Gretzky said.