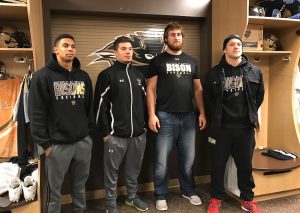 WINNIPEG — The Manitoba Bisons didn’t make it to the post-season this year, but for four student-athletes, another honour has graced them following last weekend’s 55-21 loss to the Regina Rams at home.

It’s the third time around with such a selection for Foster, 25, who was named a conference all-star at the defensive end position.

“Despite a most difficult year filled with innumerable injuries and illness to a significant amount of players, Bison Football is very proud of the four outstanding players who have been recognized in Canada West as 2016 conference All-Stars,” said head coach Brian Dobie.

Several of the team’s roster came down with the mumps in recent weeks, paired with a number of player injuries.

The Bisons missed the playoffs for the first time since the 2011 season.