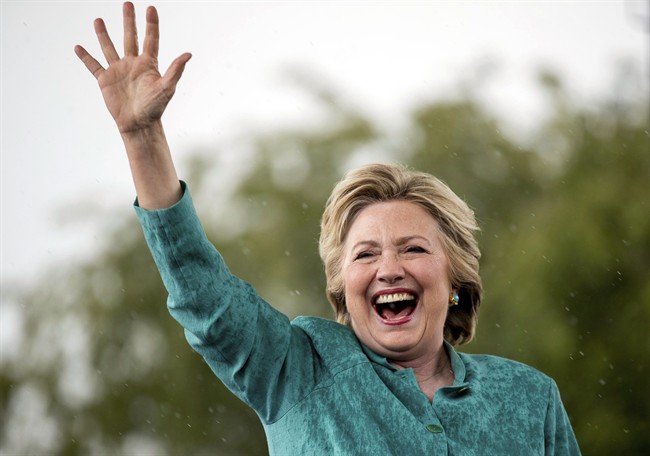 Democratic presidential candidate Hillary Clinton waves as she cuts her speech short due to rain at a rally at C.B. Smith Park in Pembroke Pines, Fla., Saturday, Nov. 5, 2016. If Hillary Clinton wins Tuesday’s election, Canada’s relationship with the White House could soon be cast as a family affair, thanks to the presidential candidate’s well-documented French-Canadian ancestry. (THE CANADIAN PRESS/AP, Andrew Harnik)

WINNIPEG — A bunch of nasty women are getting together to watch the U.S. election results pour in on Tuesday night.

The words for the night come from Republican nominee Donald Trump uttering the phrase “such a nasty woman” to rival Democratic nominee Hillary Clinton toward the end of the final presidential debate on October 19.

Now, a group of Winnipeg women is taking those words to heart, organizing a night of fun, drinks, and what they hope, will be a celebration for the first female president.

“This event is open to everyone who wants to celebrate the first female president win an election in the United States,” said Susie Erjavec Parker, one of the event’s organizers.

“We are expecting women, men, and children who are supporting the first female presidential candidate and the democratic process. Pantsuits are optional.”

More than 60 people have confirmed their intentions to attend on the event’s Facebook page.

Nasty Women Unite is being held Tuesday at The Tallest Poppy beginning at 8:30 p.m. All are welcome to attend.