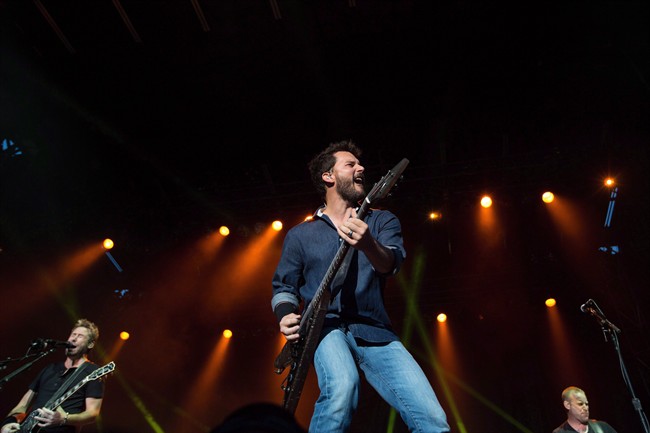 Nickelback performs during Fire Aid for Fort McMurray in Edmonton, Alberta, on Wednesday June 29, 2016. The Kensington Police Service shared a social media post last weekend promising drunk drivers will be listening to one of the Canadian band’s tunes while riding in the back seat of a cruiser if they’re arrested. (THE CANADIAN PRESS/Amber Bracken)

KENSINGTON, P.E.I. – A small-town P.E.I. police department has issued a public apology to Nickelback, and taken down a social media post that threatened to force drunk drivers to listen to the Alberta band’s music.

“I am sorry to (band members) Chad, Ryan, Mike and Daniel. Not as just members of Nickelback, but more importantly as fellow Canadians. I’m sorry guys because I didn’t take a moment to think of you AS just guys,” the officer said.

Friday’s post was unsigned, but Const. Robb Hartlen of the service last weekend shared a social media post promising to force any drunk drivers to listen to the Alberta band while in the back seat of a cruiser.

“So please, let’s not ruin a perfectly good unopened copy of Nickelback. You don’t drink and drive and we won’t make you listen to it,” Hartlen said then.

In Friday’s post, though, the officer said a message meant to deter drunk drivers instead made a charity-minded Canadian band — he particularly mentioned its response after the Fort McMurray wildfires — the butt of jokes around the world.

“I was sure a hugely successful band would be fine with a little goodwill shade thrown their way, after all it’s for a good cause. But the more successful the post became, the less the Don’t Drink and Drive message was mentioned and the fact we love or love to hate Nickelback took centre stage,” he wrote.

“And that prompted me to think less about Nickelback as the ‘entity’ and more about the four guys, four human beings from Alberta who were dragged into this international story. And the more I thought about that, the less funny the humour seemed.”

He said he loves being a police officer and being “a symbol of what is right and just with our world,” and suggested he felt hypocritical going into schools and telling kids bullying is wrong.

He said he reached out to the band’s four members and their families. “And as we spoke I found out some wonderful news. They feel just as strong about it as I do. So we decided it was best to take down the original post.”

He said the police service plans to launch a new anti-drunk driving message, and asked readers to “stay tuned.”

The Kensington service’s original post created two kinds of controversy among commenters: Those offended the police service was making a joke about drunk driving, and Nickelback fans annoyed the band was the butt of the joke.

The officer said he was stunned by criticism he was making light of drinking and driving.

“I, as a police officer, and as EVERY police officer before me, know too well the catastrophic devastation drinking behind the wheel can create,” he wrote.

“We see this destruction. We smell the pain mixed with booze covered in motor oil and blood. We take these images and sensations home with us. At no point will any of us make light of drinking and driving.”

Nickelback frontman Chad Kroeger told The Canadian Press in a 2014 interview that the critics have actually done the band a favour by heightening the public discussion about the group.