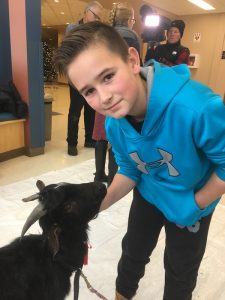 WINNIPEG — An unusual visitor stopped in at Linden Christian School on Tuesday.

Eddy the goat — yes, a goat — was the star of a lunch hour pet n’ greet for students who raised $15,000 for the World Vision Gift Catalogue this year.

Focusing on “compassionate community members,” the students spent time with one of the animals they have given as gifts to families in developing countries as part of their fundraising efforts.

Last year, more than 2,300 gifts were provided around the globe by Manitobans through the World Vision Gift Catalogue.

Final totals are still being tallied, but World Vision estimates the initiative has raised $180,000 over the past 10 years.

“They are the top school fundraiser for Gift Catalogue and we are so honoured to partner with them year after year to help benefit children and their families around the world,” said spokesperson Sarah Bartley.