Bowman Urges Winnipeggers to Come Forward After Act of Anti-Semitism 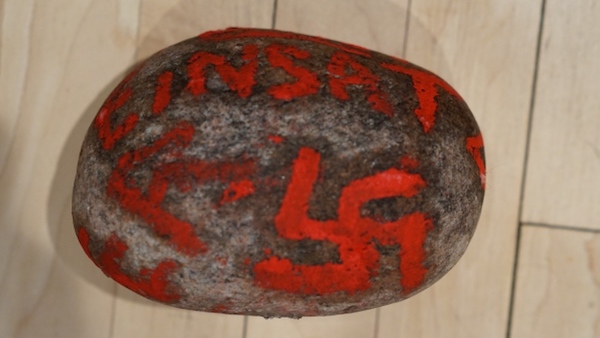 A rock with an anti-Semitic message painted on it was left outside of a Winnipeg home on New Year’s Eve. (SUBMITTED)

Mayor Brian Bowman is asking citizens to assist police in their investigation of an act of anti-Semitism on New Year’s Eve.

A couple returned home December 31 to find a large rock painted with an anti-Semitic message near their front steps.

“I am profoundly disturbed and disgusted by this reprehensible display of hate,” Bowman said.

The words “Die Jew Bitch” were scrawled on one side of the rock in red paint while a swastika and the word “Einsatzgruppen” was painted on the other. The Einsatzgruppen were mobile Nazi death squads and killed Jews — and others — during the Holocaust.

Police are investigating the act as a hate crime.

“Winnipeg is a community that embraces diversity and inclusivity. This incident goes against the values we hold dear, as a community. Winnipeggers stand together and strongly oppose any act of hate, such as this.”

“I encourage Winnipeggers to support the WPS investigation and bring forward any relevant information.”