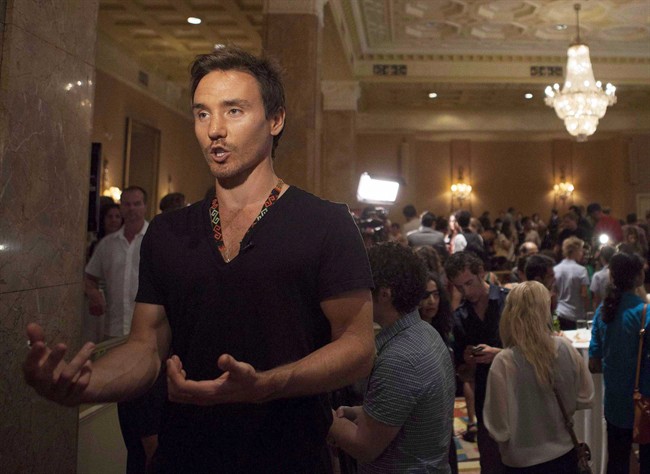 Filmmaker Rob Stewart speaks to the media about his new film Revolution during a Toronto International Film Festival press conference on Wednesday, August 8, 2012. The U.S. Coast Guard is searching for a Canadian diver who has gone missing off the coast of Florida. (THE CANADIAN PRESS/Michelle Siu)

ISLAMADORA, Fla. – The U.S. Coast Guard was searching for Canadian filmmaker Rob Stewart on Wednesday after he went missing off the coast of Florida.

Coast Guard senior chief Nyx Cangemi said crews had been looking for the 37-year-old conservationist since he was reported missing just before 5:15 p.m. on Tuesday.

Various social media posts and an online fundraiser identified Stewart as the Toronto writer-director known for his memoir “Save the Humans” as well as the documentaries “Revolution” and “Sharkwater.”

Cangemi said Stewart was reported missing near Alligator Reef in the area of the Florida Keys. The emergency call came from the crew of a boat Stewart had been on.

The U.S. Navy, the Florida Fish and Wildlife Conservation Commission and the Monroe County Sheriff’s Office are assisting in the search.

“As long as there’s a chance of survival, we’re going to search,” Cangemi said in an interview. “We remain hopeful that we’ll be able to find him alive.”

A global wildlife photographer, Stewart has devoted his career to warning the world about threats facing sharks, other ocean life and humanity in general.

“Sharkwater,” which debuted at the Toronto International Film Festival in 2006, became an international hit and prompted people around the world to lobby their governments for bans on shark finning.

Stewart said he and his colleagues risked their lives to make the film: they visited a Costa Rican warehouse that trafficked in illegal shark fin and confronted poachers on the high seas.

Stewart shot “Revolution,” which came out in 2012, in 15 countries over four years.

“This century we’re facing some pretty catastrophic consequences of our actions,” he said in a 2012 interview with The Canadian Press.

“We’re facing a world by 2050 that has no fish, no reefs, no rainforest, and nine billion people on a planet that already can’t sustain seven billion people. So it’s going to be a really dramatic century unless we do something about it.”