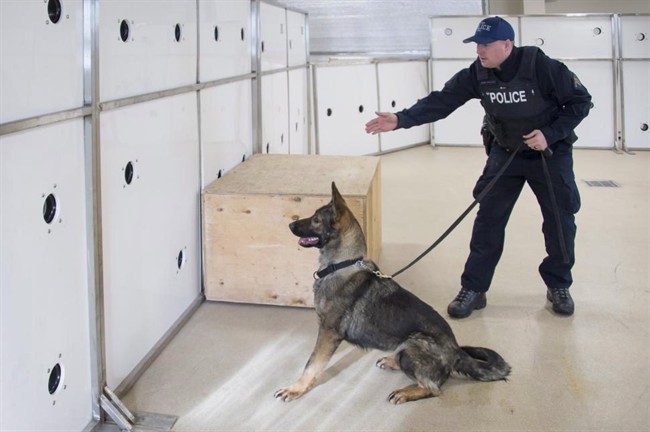 An RCMP officer and his narcotics profile dog take part training in this undated handout image from Innisfail, Alberta. The Mounties say they are training dogs to detect the deadly synthetic opioid fentanyl, and they say the training has already paid off. (THE CANADIAN PRESS/HO-RCMP )

INNISFAIL, Alta. – The Mounties say they are training dogs to detect the deadly synthetic opioid fentanyl, and they say the training has already paid off.

The RCMP says one of the three dog teams presently trained has already intercepted 12,000 tablets in B.C.

The training of all 139 RCMP narcotics profile dog teams across Canada is expected to be completed by mid-July at it’s centre in Innisfail, Alta.

The RCMP says it has transformed pure fentanyl into a diluted liquid form, enabling the dogs to train with the real smell of fentanyl with no risk of inhaling it.

Fentanyl is an opioid about 100 times more toxic than morphine which can cause serious harm, including death.

Police are warning drug users that dealers also use it in tablets made to look like prescription drugs or cut other drugs such as cocaine and heroin with fentanyl.

“I do believe the Canadian population is safer because of our new fentanyl dog training,” Inspector Akrum Ghadban, officer in charge of the RCMP Police Dog Service Training Centre, said in a release.” “By keeping more fentanyl off the street, we save Canadian lives.”