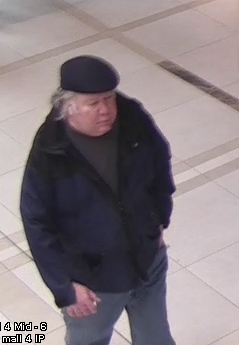 Winnipeg police have identified this man as a person of interest in the St. Vital Centre incident. (WPS / HANDOUT)

Winnipeg police have identified a person of interest after a teen girl had an unknown substance sprayed on her at St. Vital Centre.

Police on Saturday released a surveillance photo of a man accused of following a group of girls in the mall on February 19.

When the teens ducked into a store to evade the man, he is said to have sprayed or deposited an unknown white substance onto the sweater of one of the teens.

Forensic and DNA testing is ongoing on the substance.

Police say the public has helped identify the man.

“The male has been interviewed and cooperated with investigators. At this time, charges will only be considered once the forensic examination of the substance seized has been verified and concluded,” police said.

No further details of the incident have been released.