More Than a Dozen Asylum Seekers Cross into Manitoba During Blizzard 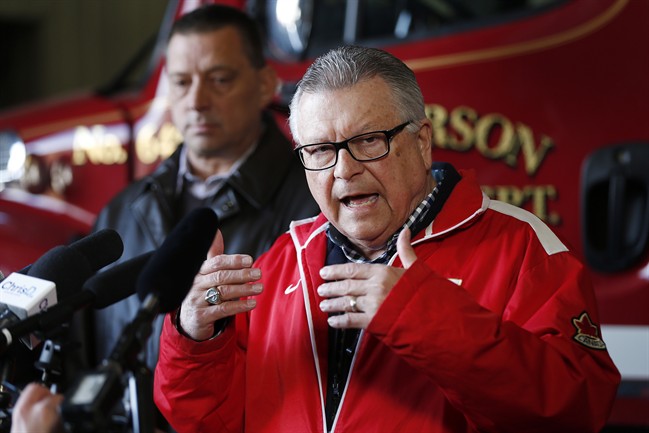 Ralph Goodale, Minister of Public Safety and Emergency Preparedness, speaks to media as Greg Janzen, Reeve of Emerson-Franklin listens in after a visit with officials at the fire hall in Emerson, Manitoba, Saturday, March 4, 2017. (THE CANADIAN PRESS/John Woods)

More than a dozen asylum seekers braved near whiteout conditions to cross the border near Emerson, Manitoba on Wednesday.

During the peak of the blizzard that closed highways across the province, including Highway 75, 17 people crossed at around 7:30 a.m. Another two tried to cross last evening.

The wind chill overnight was -28 with blowing snow reducing visibility and making conditions extremely dangerous for anyone outside in the elements for an extended period of time.

All 19 people are now at the Canada Border Services Agency port where refugee claims are made.

The asylum seekers will be housed temporarily at Emerson’s community centre until weather conditions improve and they can be safely transported to Winnipeg.

Public Safety Minister Ralph Goodale was in Emerson last Saturday, where he met with town officials and committed $30,000 in federal funding to the local volunteer fire department, who are often the first responders on scene to handle the frequent influx of refugees.