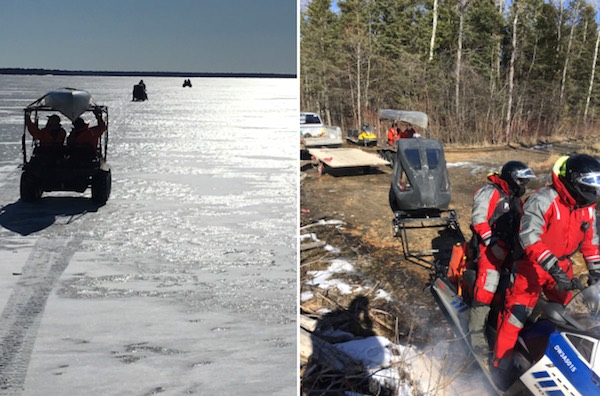 A man and his dog from Opaskwayak Cree Nation were rescued on Sunday, April 9, 2017 after their snowmobile fell through the ice in northern Manitoba. (RCMP / HANDOUT)

A 40-year-old man and his dog needed rescuing on Sunday after the snowmobile they were on fell through thin ice in northern Manitoba.

The man from Opaskwayak Cree Nation had been travelling on a tributary near Landry Lake when his vehicle broke through several kilometres from the shore.

The Pas RCMP began a rescue operation at around 1:10 p.m. with the help of Moose Lake RCMP, conservation officers, the Opaskwayak Cree Nation fire department and local council members.

Snowmobile tracks led rescuers to the location using amphibious vehicles. The man and his dog were picked up and transferred to an off-road vehicle pod attached to a snowmobile to be taken back to shore.

“We felt a surge of relief when we were able to put eyes on the two of them and saw that they were okay,” said Corporal Colin Stark with The Pas RCMP, who led the rescue team.

“Thankfully, we were able to coordinate a complex rescue in a short time because everyone pitched in. Working together equipped with the proper resources, we were able to have a successful outcome, and everyone made it home safely.”

RCMP are warning the public to use extreme caution around lakes, rivers and creeks at this time of year.