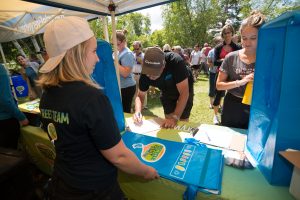 Recycle Everywhere was in Falcon Lake over the weekend in an effort to encourage Manitobans to recycle, well, everywhere, including the cottage.

A crew from Recycle Everywhere was joined by Manitoba Minister of Sustainable Development Cathy Cox for a barbecue in Falcon Lake Saturday where over around 300 Bin Bags were handed out to cottagers to use for collecting recyclables while at the lake.

“The Recycle Everywhere Bin Bag Program gives Manitobans more ways to truly have their empty beverage containers recycled everywhere,” said Cox, in a release. “I love that the program helps to keep our province’s beautiful lakes and parks cleaner, greener, and more pristine over the busy summer months.”

The initiative is part of a partnership between the Manitoba Government and the Canadian Beverage Container Recycling Association (CBCRA), which runs the Recycle Everywhere program.

The Bin Bag is a lightweight, collapsible recycling bin designed to help Manitobans recycle at their cottages. Since April, Recycle Everywhere has distributed over 16,000 Bin Bags free of charge to cottages and seasonal site across Manitoba. Additionally, more than 170,000 clear recycling bags have been provided to provincial, municipal and private campgrounds for overnight campers.

“CBCRA and Recycle Everywhere continue to do whatever it takes to provide all Manitobans with innovative and convenient ways to recycle beverage containers at home, at work, and at play,” said CBCRA executive director, Ken Friesen, in the release. “Many people are at a cottage or seasonal site in the summer; our two summer programs were developed specifically to get accessible recycling options close to where Manitobans are at play.”