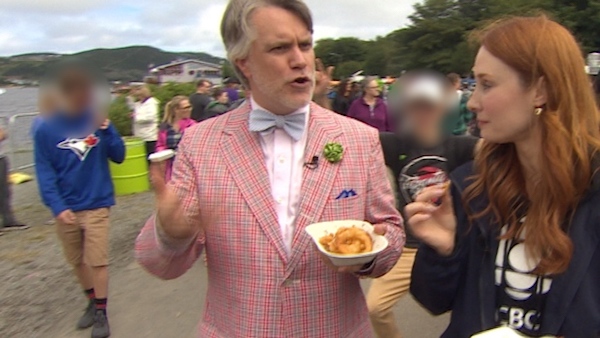 One of the young men pictured, but not identified, yelled FHRITP into the CBC camera while Carolyn Stokes was reporting. The other young man filmed it. (CBC)

ST. JOHN’S, N.L. – Police are investigating after a female reporter was heckled with a notorious sexist slur while on camera in St. John’s, N.L.

Const. Geoff Higdon of the Royal Newfoundland Constabulary says they received a complaint Thursday that a CBC reporter was heckled as she reported from the annual St. John’s Regatta a day earlier.

Peter Gullage, executive producer for CBC Newfoundland and Labrador, said Friday reporter Carolyn Stokes was doing a lakeside interview. A young man ran up behind her and screamed the phrase — often abbreviated to “FHRITP” — as a friend recorded it, he said.

“It happened in full HD — the guy ran up to Carolyn and yelled it,” Gullage said. “From our point of view it’s workplace harassment.”

The phenomenon has plagued journalists in the United States and Canada since 2015, with one of the more high-profile cases involving a heckler screaming it at a reporter covering a Toronto FC soccer game.

Toronto’s CityNews reporter Shauna Hunt confronted several men about their use of the sexually explicit remarks while doing fan interviews. One of the men was fired by Hydro One after CityNews aired the video. In Calgary, police charged a man with a traffic offence in May 2015 after he hurled the same vulgarity at a CBC journalist.

Meanwhile, a man accused of shouting the same slur at another St. John’s news reporter last April entered a not guilty plea to a mischief charge Thursday.

NTV reporter Heather Gillis was interviewing a city councillor in April when a man in a passing truck allegedly called out the phrase. Gillis said it was the third time she has been targeted with the expression since she started working at the broadcaster in December 2011.

“I’m fed up — I’m tired of it,” Gillis said in April. “No one should have to endure that while they’re working. I’m a professional and I was humiliated interviewing a politician. It’s time for it to stop.”

Gullage said the CBC caught the most recent slur on video.