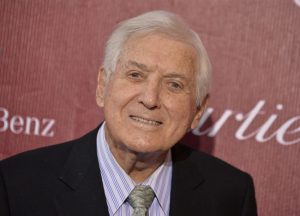 The death of legendary Winnipeg-born game show host Monty Hall is being mourned by the charity that made him a chairman for life.

Variety, the Children’s Charity of Manitoba, says Monty and his wife, Marilyn, committed a lifetime of involvement with the organization.

Hall is best known for hosting “Let’s Make a Deal.” He passed away over the weekend at the age of 96 due to heart failure.

Louis Trepel, Variety Manitoba’s international ambassador, was only 18 when his dad brought him to a meeting organized by the TV game show host to see if there was interest in opening a Variety Tent in Winnipeg.

“My dad asked if I wanted to be part of it, and I said ‘yes, for sure.’ Everybody seemed so old to me back then, but I listened as Monty Hall told the Variety story to see if there was interest here,” Trepel said.

Variety Manitoba credits Hall, along with multiple individuals, in their birth of the charity in 1978.

Through fundraising efforts, Hall is also being lauded for helping Variety to bring in more than $800 million for the charity’s international arm.

Hall is survived by his three children, all of whom are involved in the entertainment industry.