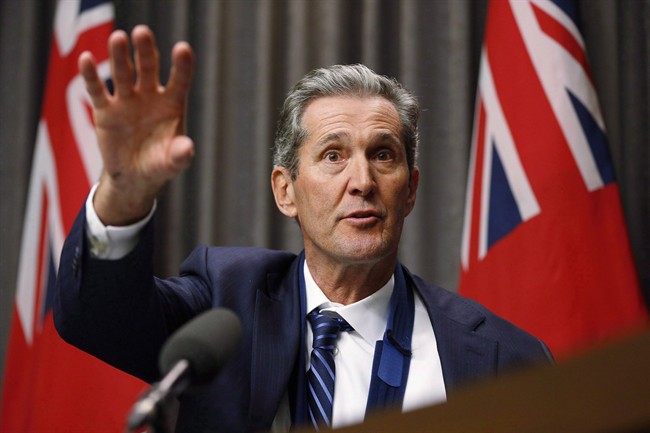 Manitoba Premier Brian Pallister speaks to media at an embargoed press conference before the provincial throne speech at the Manitoba Legislature in Winnipeg, Tuesday, November 21, 2017. (THE CANADIAN PRESS/John Woods)

WINNIPEG — The governing Progressive Conservatives, under Manitoba Premier Brian Pallister, have widened their lead over the opposition NDP, a new poll suggests.

According to a new Mainstreet Research UltraPoll, released on Friday, the PCs have 49.8 percent support — up six percent since January — while the NDP is at 38.7 percent.

“This is good news for Premier Pallister,” said Quito Maggi, president and CEO of Mainstreet Research.

“The margin between the PCs and NDP stood at three points in January, but the gap now stands at more than fifteen points.”

The Manitoba Liberals, led by Dougald Lamont, currently have 13 percent support (-0.3 percent), while the Greens are at 3.3 percent (-2.6 percent).

“The PCs lead in every demographic — except among Manitobans aged 50 to 64 — and in all regions in the province,” Maggi added. “This certainly bodes well for Premier Pallister as his government shows no signs of mid-term blues as his government approaches the midpoint of its mandate.”