The Reklaws Set to Perform at Blue Bombers’ Home Opener 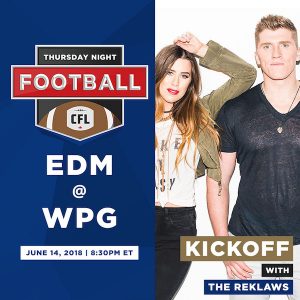 Canadian country duo The Reklaws have been tapped to perform at the Winnipeg Blue Bombers‘ home opener on June 14 when the team hosts the Edmonton Eskimos.

Not only will siblings Jenna and Stuart Walker help kick off the CFL season on opening night in Winnipeg, their latest hit, “Long Live the Night,” has been cut into a new football-themed version to become the opening intro song for each” Thursday Night Football” game on CFL on TSN.

“It’s an absolute honour to perform in front of a packed house in Winnipeg at Investor Groups Field as well as the rest of Canada that will be tuning in to CFL season kickoff,” said Jenna Walker, vocalist from The Reklaws, in a release.

The duo was raised in Cambridge, Ontario and first made waves in the Canadian country music scene by winning the biggest country music talent competition in Canada, the SiriusXM Emerging Artist Showcase at Boots and Hearts in 2013. They have since played across the country, opening for the likes of Luke Bryan, Blake Shelton, Dierks Bentley, Brothers Osborne, Thomas Rhett, and High Valley.