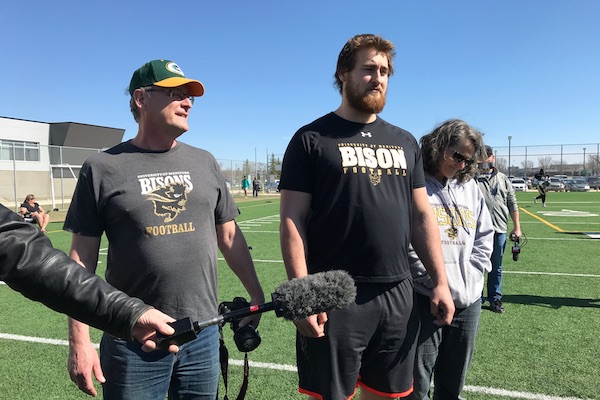 U of M Bisons offensive lineman Geoff Gray stands with his parents on Sunday, April 30, 2017, one day after signing a free-agent contract with the Green Bay Packers. (CHRISD.CA FILE)

The Winnipeg Blue Bombers are shoring up their offensive line by bringing in city product Geoff Gray.

The Winnipeg native and former University of Manitoba Bison was selected by the Bombers eighth overall in the 2017 CFL Draft.

Gray was signed by the Green Bay Packers of the NFL in April 2017, and also spent time with the New York Jets and Cleveland Browns.

“I am very excited to be joining the Winnipeg Blue Bombers,” Gray said in a statement.

“I look forward to being able to play at home in front of family and friends. It is rare to be able to play professional football where you grew up, and in the same stadium with many fond memories from university football.”

Gray, who was named the Canada West Outstanding Down Lineman of the Year in 2017, is with the Blue Bombers through the 2020 season.