Up Close and Personal with Churchill’s Whimsical Beluga Whales 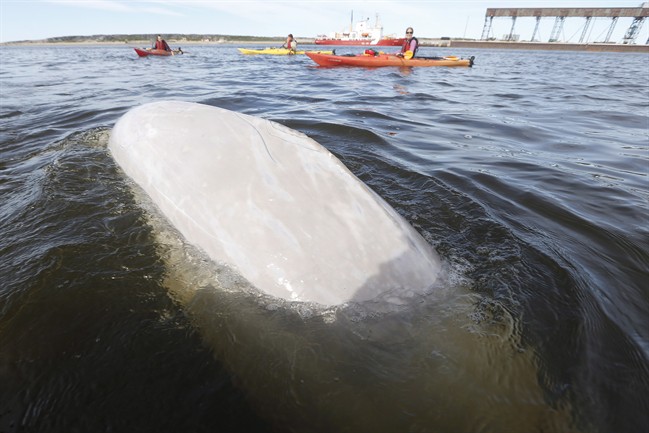 A beluga whale surfaces for air as whale watchers head out in kayaks on the Churchill River in Churchill, Manitoba, Wednesday, July 4, 2018. All it takes is a quick paddle from the western shore of the Hudson Bay and the smiling, curious face of a beluga whale peeks out of the water to greet kayakers floating by. (THE CANADIAN PRESS/John Woods)

CHURCHILL, Man. – All it takes is a quick paddle from the western shore of Hudson Bay and the smiling, curious face of a beluga whale peeks out of the water to greet kayakers floating by.

The northern Manitoba community of Churchill is known as the polar bear capital of the world, but the largest population of beluga whales also calls its Hudson Bay coastline home.

Dressed in a wetsuit, with the cool air of the bay at your back, you can kayak just past the community’s port and meet the inquisitive stares of dozens of the greyish-white whale. It’s an up-close and personal experience that you can’t get many other places in the world when a beluga whale swims around your kayak, giving it a playful nudge.

As the ice melts in the spring, more than 57,000 whales — one-third of the world’s population — head into the warm waters of the estuaries formed by the Seal, Nelson and Churchill rivers to breed, feed and molt.

The playful mammals swim in pods, diving deep into the water before coming up to the surface and shooting air out of their blowholes, to the delight of people nearby. The whales can be watched from the shore, but a handful of tourism companies run professionally guided adventures into the water by boat, kayak or paddleboard.

Wally Daudrich, owner of Lazy Bear Expeditions and president of the Churchill Beluga Whale Tour Operator Association, said there is a certain whimsy when you are in the presence of beluga whales.

“They have this permanent smile on their face that you just can’t wipe off, and just the antic that they play when they are under water looking up at the boat you see them spinning around,” he said.

Belugas are unique physiologically because, unlike most other whales, their neck vertebrae are not fused. That is why they look like they are articulating with their necks, Daudrich explained.

“They look like they are using a chin and agreeing with you by moving their heads up and down,” he said.

For the tourists willing to slip into a wetsuit, the whales come right up to their kayak or paddleboard, appearing to nod their approval that you’ve joined them for a chilly swim. You’ll be surrounded by a handful of whales almost immediately after entering the water.

“It’s the interaction that people are really thrilled with… another intelligent animal that is looking at me and is cognisant of my presence as I am of their presence,” Daudrich said.

The cool weather may keep most of the tourists inside their inflatable boat, which allows for close proximity but keeps people dry.

Daudrich said guides never pursue the whales and keep a distance from pods. But when the boat motor is turned off the whales surround them.

Guides drop a special microphone called a hydrophone into the water and suddenly its clear why the belugas are nicknamed sea canaries. A high-pitched whistling, clicking and chirping rings out of a Bluetooth speaker on the boat.

The whales’ song makes the perfect atmosphere for watching them dive and dance around the boats, but it also has an important purpose for their survival. The clicking bounces off fish and other things in the water so belugas can navigate and hunt.

The beluga whale always played an important role for the Inuit communities along the bay — whale fat is made into oil and the skin and blubber is made into muktuk, which provides essential nutrients like vitamin C and vitamin D. Cree and Dene hunted belugas, too.

As the Churchill area became a hub for trade in the 1700s, whale continued to be a source of food but it never became a main resource.

Over the years there were some attempts at a commercial whaling operation — one factory made whales into dog food— but most were unsuccessful and ceased operation half a century ago.

Now beluga whales are an important part of the community’s ecotourism. In 2016, beluga-related tourism was estimated at $5.6 million annually between June 15 and Aug. 30, with expectations it would continue to grow.

But Daudrich said there are serious concerns about new rules imposed by Fisheries and Oceans Canada, which says there needs to be a 50-metre clearance for boats to approach beluga whales. He said because there are so many whales in the bay, just putting a boat in the water could constitute breaking the rules.

However, he is hopeful there will be a way to keep the extraordinary experience with the whales accessible.

“We are treating them respectfully,” he said.

“I always jokingly tell my clients we are partners in whale watching because (the whales) participate so well with us. Why would we mistreat the animals that are the core of our business?”

— There are no roads to Churchill but a flight from Winnipeg is about two hours long. The rail line to the community was washed out in 2017 but it is expected to be repaired and running in the coming months.

— The best time to see the pods of beluga whales is July and August.