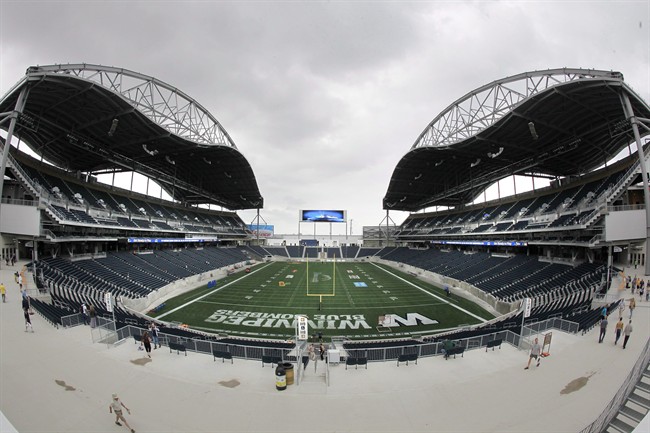 Winnipeg Blue Bombers’ new home Investors Group Field prior to the first day of Rookie Training Camp in Winnipeg on May 29, 2012. (THE CANADIAN PRESS/John Woods)

NEEPAWA, Man. — Our roads are in shambles and Manitobans are concerned about cutbacks to health care, yet last month, the provincial government announced that it is writing off $82 million in loans to the Winnipeg Blue Bombers.

The loans are related to the construction of the Bombers’ new stadium, Investors Group Field, and are part of a saga that has been filled with nothing but bad news for taxpayers.

The new stadium opened in 2013, but right from the start, there were problems, beginning with the location. The stadium was moved from an accessible and well-developed location just north of Polo Park, to a site at the University of Manitoba, full of choke points for both car and transit users.

The Polo Park location’s redevelopment was to help pay for the new stadium. When the land was sold to a partnership of Cadillac Fairview and Shindico Realty, the City of Winnipeg put $7.5 million towards the new stadium. The property taxes generated from the redevelopment were supposed to cover payments on the new stadium’s $75 million loan. A new store for Target was built at the site, but with the American retailer pulling out of its Canadian operations, the site has done little to pay its way. Once fully developed, the site was supposed to generate $7 million a year in property taxes, but in 2017, City of Winnipeg figures showed it had only generated a total of $3 million.

Beyond the issue of location, the new stadium has suffered from numerous physical problems, including drainage, damage due to leaks, cracking concrete and freezing pipes. The province guaranteed $35 million in loans to repair the deficiencies and in 2017, it was announced that the remediation work would take another two years. In 2015, the problems led Triple B Stadium Inc., the group that includes the city, province, University of Manitoba and Winnipeg Football Club, to bring a lawsuit against both Stuart Olson, the stadium contractor, and Ray Wan, its architect.

The stadium cost about $209 million to build, but recent figures from the Auditor General show that with the additional remediation work, the price is expected to rise to more than $270 million. With this most recent announcement, the province has written off $201 million in loans related to the construction of the stadium. In announcing the most recent write-off, the provincial government pointed fingers at the previous NDP government, which negotiated the deal, accusing them of cooking the books. Current NDP leader Wab Kinew took the unusual step of admitting that the decision made by the previous leadership was wrong.

Right from the beginning, the new stadium felt like a build first, ask questions later sort of deal. The old stadium was out of date and developers saw a prime piece of real estate. The project was pushed along at each stage, setting up short timelines that meant it was only a question of when something would go wrong, not if. The government and the public were swept up and no one asked the hard questions: Is the facility affordable? Who will pay for it and how? There was clearly no Plan B should the redevelopment of the former site not achieve its objectives.

What exactly the football club’s financial obligations will be going forward remain unclear. What is clear is that the facility, which hosts 10 regular season football games and a few other events, can’t even come close to paying back the cost of construction.

We all want things we can’t afford and this hard lesson needs to be remembered for each new project aimed at benefiting a small group of Manitobans. Now that the provincial government has forgiven most of the loans to construct the stadium, perhaps it’s time to think about ways that investment could be used to benefit all Manitobans.