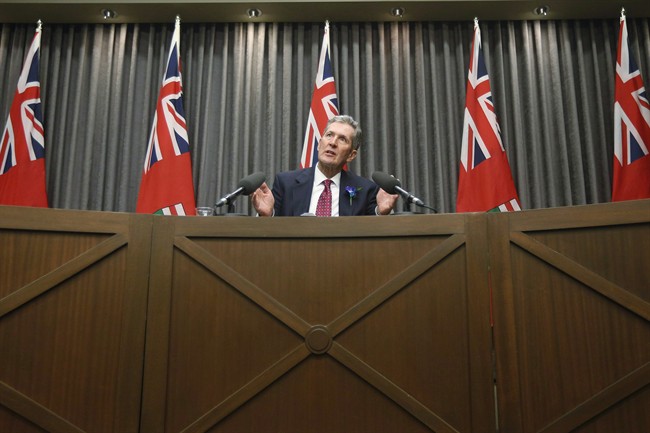 Manitoba Premier Brian Pallister speaks to media after the reading of the throne speech at the Manitoba Legislature in Winnipeg on November 20, 2018. Manitoba Premier Brian Pallister says an Opposition call for buffer zones around abortion clinics and hospitals would be a slippery slope toward taking away some freedoms. (THE CANADIAN PRESS/John Woods)

The proposed law would not allow people to “inform or attempt to inform a person concerning issues related to abortion services” within up to 150 metres of facilities where abortions take place.

The only exceptions would be for people accompanying a woman seeking the service, or for health care workers in the performance of their duties.

There would also be buffer zones around pharmacies that dispense Mifegymiso and the homes of any abortion service provider.

Fontaine said her bill, based on similar legislation in Alberta and Ontario, would ensure women can get the services they want without being subjected to intimidation or protests.

“This is fundamentally about protecting Manitoba women and girls’ right to access our health care system, which includes accessing abortion,” Fontaine said.

Pallister said Fontaine’s idea would infringe on a basic right.

“She is addressing a problem that in her mind exists for one group, while failing to recognize that there’s a slippery slope here in taking away the freedoms of citizens to exercise their rights to express their views,” Pallister said.

Pallister also said the bill’s wording could be interpreted to include a ban on protests that Fontaine would support.

He later told reporters that if women are being obstructed or harassed in accessing health care services, they already have legal protection.

The vast majority of opposition bills fail to become law unless they have the support of the government, but Fontaine said the Progressive Conservatives should put aside politics and pass her bill.

She said she has heard from women being subjected to anti-abortion protests and graphic images as they make their way into health care facilities.