Home » News » Christmas Cheer Board Working in Smaller Warehouse, But Call for Donations Bigger Than Ever

Christmas Cheer Board Working in Smaller Warehouse, But Call for Donations Bigger Than Ever 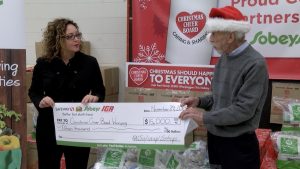 WINNIPEG — It’s like a condensed version of Santa’s workshop, but don’t let the size of this year’s warehouse fool you, the Christmas Cheer Board is busier than ever.

After moving from its home of 13 years on Milt Stegall Drive this season, the Cheer Board has set up shop in a former Staples store a few blocks away on St. James Street.

“It sort of stimulates the brain cells when you move from one place to another,” executive director Kai Madsen said on Thursday while donning a Santa hat.

Despite the smaller space, which Madsen says is approximately 10,000 square feet less than their former home, it was all hands on deck as students from Archwood School and Amber Trails Community School worked the assembly line to fill hampers.

The Cheer Board distributed nearly 18,000 hampers last year with the help of generous volunteers while facing the largest deficit in its history. Madsen can’t pinpoint an exact cause for the drop in funding, but says a rise in online donations and a reduction in personal interaction with donors could be to blame.

“I’ve grown to know an awful a lot of people in Winnipeg and some of those people are doing it (donating) online… and I feel bad because I don’t get a chance to see them and say hi,” Madsen said.

“And that does impact the way you do your donations, so I’m hoping we can generate some really warm and caring thoughts and feelings, and maybe prompt them to come in and have a cup of coffee.”

The Christmas Cheer Board buys roughly half of its inventory to fill gaps in its hampers, such as frozen turkeys and toys. Longtime partner Safeway, Sobeys and IGA presented Madsen with a cheque for $15,000 on Thursday during the organization’s annual media launch. Madsen says cash continues to remain king and invited the public to come down and see their operation, but also not to forget the chequebook at home, he added.

Those wanting to make a donation or sponsor a hamper can do so online, or in-person at a number of locations across Winnipeg, including the Cheer Board’s office at 947 St. James Street.