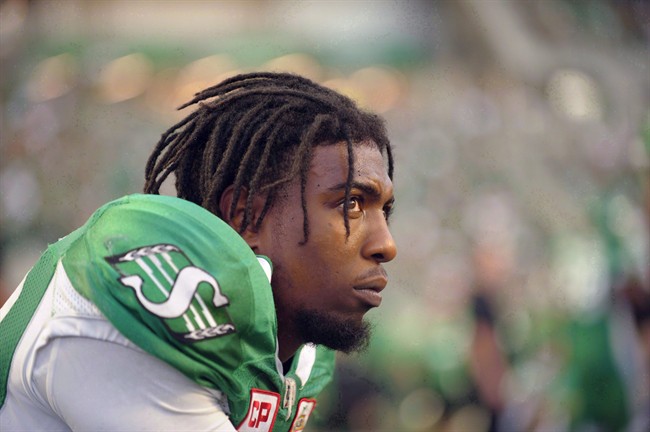 Saskatchewan Roughriders wide receiver Duron Carter takes a breather during first half CFL action against the B.C. Lions, in Regina on Sunday, August 13, 2017. Former Saskatchewan Roughriders wide receiver Duron Carter caught a break after pleading guilty to a marijuana possession charge stemming from his arrest at the Saskatoon airport. (THE CANADIAN PRESS/Mark Taylor)

SASKATOON – A former wide receiver with the Saskatchewan Roughriders has been given an absolute discharge after admitting to marijuana possession.

Duron Carter’s lawyer appeared in Saskatoon provincial court and replaced his client’s not guilty plea from earlier this year with one of guilty.

Carter was arrested at the Saskatoon airport in February after customs officers opened a cigar package in his luggage and found cannabis inside.

A judge accepted a joint submission from the Crown and defence asking that Carter receive the absolute discharge.

That means the conviction will show up on Carter’s record for one year before it is wiped out.

Carter had already received an absolute discharge earlier this year on another pot possession charge in Winnipeg.

Carter was named most outstanding player with the Roughriders in the 2016-17 CFL season. He was let go by the team last August and joined the Toronto Argonauts.