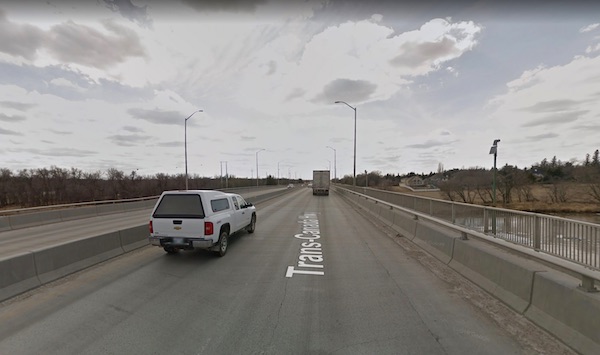 One westbound lane over the Red River Bridge along the South Perimeter Highway has been closed since November. Both lanes will close for repairs beginning on Sunday. (GOOGLE STREET VIEW)

The province is closing the westbound lanes over the Red River Bridge along the south Perimeter Highway to fix surface cracks in the bridge deck concrete.

One westbound lane of the bridge has been closed since November 14 as a safety precaution. Beginning Sunday, December 16, both westbond lanes will be closed until repairs can be completed by January 4, 2019.

During the closure, traffic will be detoured to a single lane in each direction in the eastbound lanes. On December 21 and 22, pilot vehicles will be used to slow traffic for approximately 24 hours for pouring concrete and curing operations.

Manitoba Infrastructure is reminding motorists to slow down while travelling through the area when they see construction signs and flaggers at the roadside.