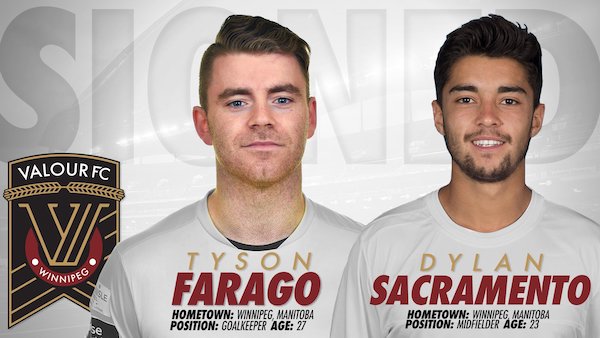 Farago, 27, joins Valour FC after spending most of the 2018 season with St. Patrick’s Athletic of the League of Ireland Premier Division.

Farago’s football career began in the Manitoba Major Soccer League (MMSL), then to Brazil with Goias Esporte Clube before he returned home to Winnipeg to join Lucania (MMSL) in 2009.

Sacramento, 23, joins Valour FC from Vaughan Azzurri of League 1 Ontario. In 2018, he scored 14 goals in 14 appearances with the club and was named a First Team All-Star and the Men’s Division MVP.

The seven-team Canadian Premier League will debut in April 2019.