Home » The Canadian Press » Vancouver Gets First Licensed Pot Shop as B.C. Lags Behind Other Provinces

Vancouver Gets First Licensed Pot Shop as B.C. Lags Behind Other Provinces 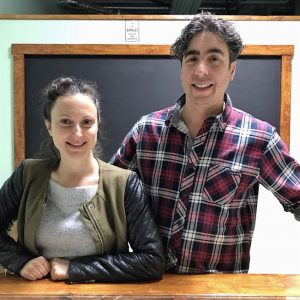 Maria Petrucci and Mike Babins, married co-founders of Evergreen Cannabis in Vancouver, are pictured in a handout photo taken at the store on Thursday, Dec. 27, 2018. (THE CANADIAN PRESS/HO-Stephen Lebovits)

VANCOUVER – A licensed marijuana store is set to open in Vancouver as the number of legal pot shops in British Columbia still lags behind other provinces.

Evergreen Cannabis owner Mike Babins said the store received its provincial licence this week and plans to open its doors on Saturday.

As long as it receives a municipal licence, it will be the first legal store in the city since recreational cannabis was legalized on Oct. 17.

“They went back 20 years with me and my wife to find out every job we’ve had, every vacation we’ve taken.”

The store co-founded by Babins and his wife Maria Petrucci in the city’s Kitsilano neighbourhood originally opened as a medical marijuana dispensary in September 2015. It operated for three years with a municipal licence under the city’s old licensing regime.

The couple shut the store’s doors on Oct. 16 while they waited for provincial approval to reopen as a recreational weed shop.

A number of illegal dispensaries remain open in Vancouver despite a court order this month affirming the city’s authority to shut them down.

The approval of Evergreen brings the total number of licensed marijuana shops in B.C. to five, with the others in Kamloops, Kimberley and Pouce Coupe.

Provincial government websites list 65 licensed pot retailers in Alberta and 20 in New Brunswick, while Ontario will not have any stores until April.

B.C. Public Safety Minister Mike Farnworth has defended the province’s pace on pot shops, saying the government gave more of a voice to municipalities than others.

Babins said he believes B.C. licensing officials are working hard and he understands why it’s taking so long to licence stores.

“Having seen what the process is, I completely understand now,” he said.

The couple paid taxes from Day 1, tracked everything they purchased and never borrowed money, instead using retirement savings to open the store, he said. They also hired a lawyer and consulting firm to help with the application.

“We did everything right. We made it easy for them and it still took this long because they had to check to make sure we were squeaky clean.”

They applied for a provincial licence in mid-August and finally received it on Tuesday.

The store still requires a new municipal licence to operate legally. Babins said the city has signalled its support of the store but no one is available over the holidays to issue their licence, so the couple plans to be at city hall first thing on Tuesday.

He said he isn’t worried about the city cracking down on the shop in the intervening days.

“I think with all the completely illegal and illicit stores that haven’t been shut down … it would be a bit of a media disaster if they came after the first licensed shop in the city because we opened up two days earlier than they came back from their Christmas vacations.”

Although shortages persist across the country and many items on the BC Cannabis Store are listed as “limited quantity,” Babins said he anticipates having enough supply.

He ordered from the province’s distribution centre in nearby Richmond on Thursday and expects to receive his shipments in time to open on Saturday. His goal is to have 20 different strains on site at all times.

Asked what he expects from customers on Saturday, Babins described Kitsilano as “ground zero for legalization of cannabis since the 1960s.”

“Then there’s all the middle-aged couples, the parents, the soccer moms, who are so glad the stigma is finally up. … And I’m assuming there are going to be a lot of people who are just curious, too.”