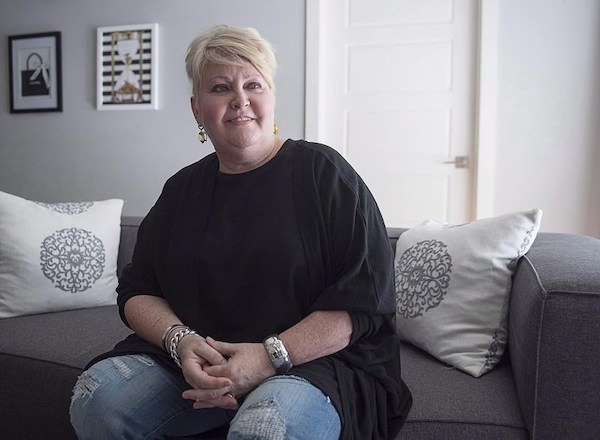 Audrey Parker, diagnosed with stage-four breast cancer which had metastasized to her bones and has a tumour on her brain, talks about life and death at her home in Halifax on Tuesday, Oct. 23, 2018. (THE CANADIAN PRESS/Andrew Vaughan)

Audrey Parker died with medical assistance on Nov. 1, two years after she had been diagnosed with terminal breast cancer.

On Wednesday, Dying With Dignity Canada released a video message that Parker recorded just three days before she died.

In the three-minute clip, Parker urges Canadians to speak out for the rights of suffering Canadians who have been approved for medical assistance in dying.

The group is calling on federal lawmakers to change a provision requiring people to confirm their wish for assisted dying immediately before the procedure is provided.

Parker said the current rules forced her to play a cruel game of chicken, and choose to die in November instead of being able to spend Christmas with her family.

The group’s CEO, Shanaaz Gokool, says the late consent rule leads some people to end their lives before they are ready, out of fear they will lose capacity to give permission.

She says others refuse proper pain care at end of life to ensure they’re alert enough to confirm their request for medical assistance in dying.

Gokool says no one should ever have to choose between spending a few more days or weeks with their loved ones and their right to a peaceful, assisted death.

The group has launched a petition to lobby the government for changes.