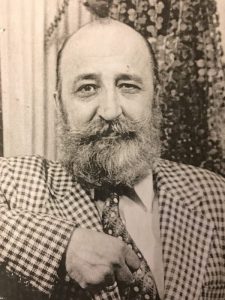 Founder Georges Forest is an important part of the Festival du Voyageur legacy, known for dressing as a voyageur year-round and ensuring Franco-Manitoban culture lived on beyond his time. Forest gave his life to the festival, which is where he passed away in 1990.

“Georges Forest’s vision and pride has carried us through these last 50 years and will continue to carry us into the next 50,” said Darrel Nadeau, executive director of Festival du Voyageur.

“We’re so grateful for the work he put into making this festival happen, and are honoured to pass that legacy and heritage onto the next generation.”

Organizers have renamed La Prairie Tent to the Forest Tent in tribute of the founder and first official voyageur, Georges Forest, and his wife Anita. 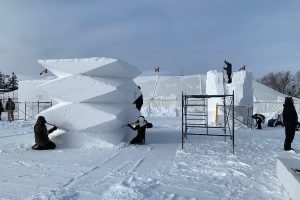 Sculptors work on their snowy creations in Voyageur Park on Thursday, February 14, 2019. (CHRISD.CA)

As Festival du Voyageur looks back on its own history, dogsled rides will return as part of this year’s festivities. A special night of music at the Centre culturel franco-manitobain will also feature artists that highlight the Franco-Manitoban musical evolution of the last five decades.

The important role Indigenous communities played in the fur trade will also be front and centre and will highlight the First Nations, Metis, and Inuit cultures through its rich heritage program and musical programming.

Along with the old, some things are new this year, including the additions of the Festi-Bar on Ice at The Forks, silent discos, and a chocolate sculpting expo.