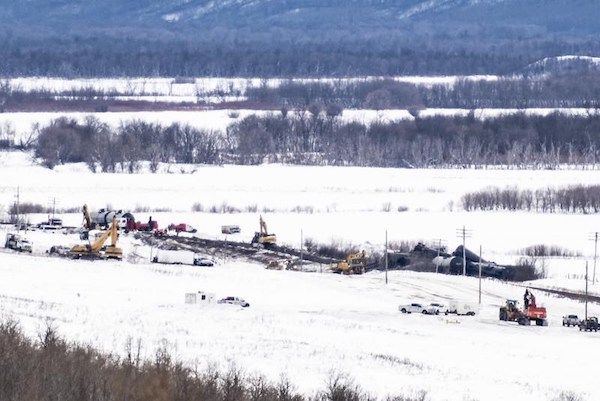 Excavators work at the site of a train derailment ten-kilometres south of St-Lazare, Man. on Saturday February 16, 2019. A train carrying oil has derailed and is leaking in western Manitoba. Canadian National Railway says in a statement that 37 cars carrying crude left the tracks early Saturday morning near St-Lazare, just east of the Saskatchewan-Manitoba boundary. (THE CANADIAN PRESS/Michael Bell)

ST-LAZARE, Man. — Canadian National Railway says a leak from a derailed train carrying oil in western Manitoba has been contained, but some pipeline supporters believe the incident highlights the risks involved in shipping oil by rail.

CN said in a statement that 37 cars carrying crude left the tracks early Saturday morning near St-Lazare, just east of the Saskatchewan-Manitoba boundary.

The railway said there was “a partial leak” of crude, and its environmental team was working to clean up the site and protect the environment.

Later in the afternoon, company spokesman Jonathan Abecassis said the leak had been contained and none of the spilled oil made it into the nearby Assiniboine River.

He said it still wasn’t known how much oil had spilled.

CN said there were no reports of injuries or fires.

Supporters of moving oil via pipelines, who happened to be gathering for a rally in nearby Moosomin, Sask., argue that it’s a safer alternative to shipping by rail.

“If you’ve got trains, you’re going to have derailments,” said Barry Lowes, reeve of the Rural Municipality of Ellice-Archie, Man., which surrounds St-Lazare.

Lowes, who was attending the pro-pipeline rally on Saturday, said “quite a bit” of oil had spilled in an area close to the Assiniboine River, and one farmer lives close to the derailment.

“I could see (the railcars) off the track. I could see machinery working down there,” said Lowes, noting there was a foul smell in the area.

He noted it’s not the first derailment in the community: in 1991, about 400 residents of St. Lazare fled their homes when a train derailment spilled dangerous chemicals. They returned six days later.

St-Lazare fire chief Owen Jessop said firefighters were called to the scene of Saturday’s derailment about eight kilometres south of the community at about 3 a.m., noting it was dark and hard to see anything.

Jessop said the train crew was fine, and firefighters set up a perimeter to keep people away from the wreck.

He said the smell was similar to a gas station.

The Transportation Safety Board has deployed a team of investigators to the site.