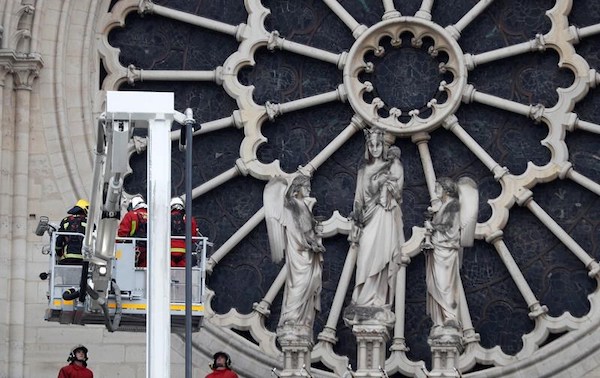 Firefighters work near the rose window of Notre Dame cathedral Tuesday, April 16, 2019, following the devastating fire Monday night in Paris. Experts are assessing the blackened shell of Paris’ iconic Notre Dame Cathedral to ascertain what artifacts can be saved and what has been lost in the blaze. (AP Photo/Thibault Camus)

MONTREAL — The fire that swept through Notre Dame Cathedral in Paris on Monday should serve as a reminder that having proper plans and documentation of valued Canadian buildings is crucial, heritage advocates say.

The blaze, which destroyed the cathedral’s roof and spire, has triggered an outpouring of unity and financial support as well as a promise from French President Emmanuel Macron to rebuild within five years.

When they do, they’ll have a wealth of information to rely on, said Martin Bressani, director of the Peter Fu School of Architecture at McGill University.

Bressani said most major Canadian landmark buildings and structures likely have detailed plans and documentation. “I would say yes, every major prestigious building in Canada, which is often not much older than 19th Century, is documented,” he said.

Jerry Dick, executive director of the Heritage Foundation of Newfoundland and Labrador, said the Basilica of St. John the Baptist in the province’s capital underwent a digital scan two years ago that would be of great value if the building were ever damaged. Such detailed plans are important for two reasons — restoration and reproduction but also for a historical record if rebuilding is impossible.

“Every square inch of that building, inside and outside, was scanned to a very high degree, so they have the type of documentation right now that, heaven forbid, should something like that happen, they would have the information to restore or reproduce elements,” Dick said.

Other properties, often in smaller communities, may slip through the cracks when it comes to having proper files, said Ali Piwowar of the National Trust of Canada, a not-for-profit organization that advocates for heritage sites.

“Obviously there’s a benefit of having a record like that if you were to capture the exact condition of the building in order to reconstruct it,” Piwowar said. “But when you’re looking at something in a small town … it’s probably pretty unlikely they’ve had recording done, so being able get a hold of the original construction drawings is always recommended for the owners to have something on file.”

In terms of protecting heritage, many properties have seen sprinkler and fire-safety systems installed in recent years, Piwowar added.

Stephane Corriveau, operations chief for the Montreal fire department, noted that Montreal’s Notre-Dame Basilica was hit by fire in 1978 and reopened in 1983 with fire protection, alarms, interior sprinklers and a dry-pipe sprinkler system for the exterior of the building.

“From our perspective, we can’t have any better than that,” said Corriveau, calling it one of the safest churches in Canada. “But for most churches, putting them up to code is very expensive.”

There are about 400 churches in Montreal, including St. Joseph’s Oratory, Canada’s largest church, which is built from stone and is largely fireproof with the exception of its contents, Corriveau said. Meanwhile, Mary Queen of the World Cathedral in downtown Montreal, completed in 1894, never had a fire and was never outfitted with modern fire prevention measures.

Montreal Archbishop Christian Lepine, who conducted a special midday mass at the basilica Tuesday in honour of its Paris namesake, told reporters that Montreal churches are equipped with alarms connected to the fire service and some of the bigger venues have video surveillance.

As for rebuilding Notre Dame Cathedral, Bressani noted the spire that was felled by the flames was actually a more recent edition from the mid-19th century, the work of Eugene-Emmanuel Viollet-le-Duc.

“When he created this in the mid-19th century, the spire had been destroyed for centuries and there was no documentation coming from the Middle Ages as to what the original spire looked like,” Bressani noted.

But current restoration officials will have access to Viollet-le-Duc’s drawings in the archives as they rebuild. The questions will centre on design and materials.

“To do something like the spire is an incredible challenge, so that will be interesting to see,” Bressani said.