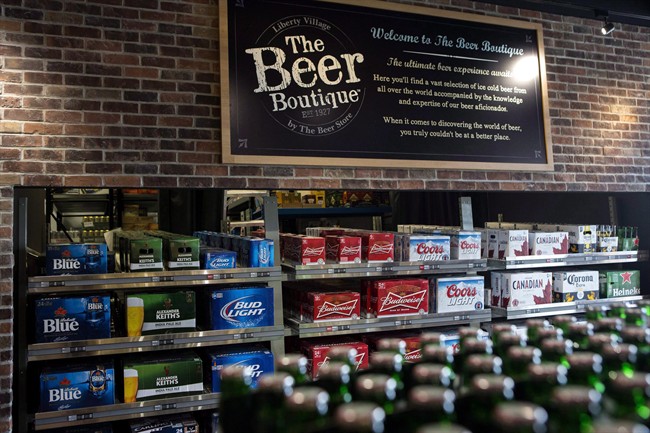 A Toronto beer store is pictured on Thursday, April 16, 2015. (THE CANADIAN PRESS/Chris Young)

REGINA — Saskatchewan residents no longer have limits on how much alcohol they can bring home from other provinces for personal use.

The government says most provinces have some restrictions when it comes to the interprovincial movement of liquor.

Jeremy Harrison, minister of trade and export development, says the government is committed to erasing unnecessary trade barriers between provinces.

He says lifting restrictions is part of a broader discussion other provinces have had over trade.

People buying alcohol from other provinces and bringing it into Saskatchewan has been happening for years, Harrison says.

“The Alberta border’s an hour away from where I live. I would suspect that you would find most citizens didn’t even know there was a restriction on personal importation limits already,” he said Tuesday.

“We actually have tried to find the last prosecution for over-limit importation and we can’t actually find one.”

Previously, Saskatchewan residents could bring in nine litres of wine, three litres of spirits and just under 25 litres of beer, coolers or a combination of the two.

Alberta, Nova Scotia and Manitoba have also eliminated restrictions on how much personal booze people can bring into those provinces.

Harrison believes the change will have a minimal impact on Saskatchewan’s economy.