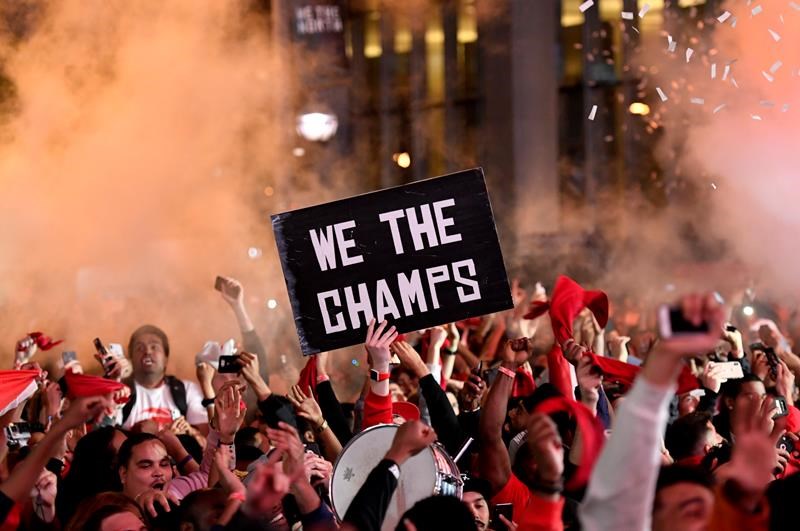 Toronto Raptors fans react inside Jurassic Park, outside of the Scotiabank Arena, in Toronto, as they watch the Raptors defeat the Golden State Warriors in game 6 of the NBA Finals to win the NBA Championship, Thursday, June 13, 2019. (THE CANADIAN PRESS/Nathan Denette) 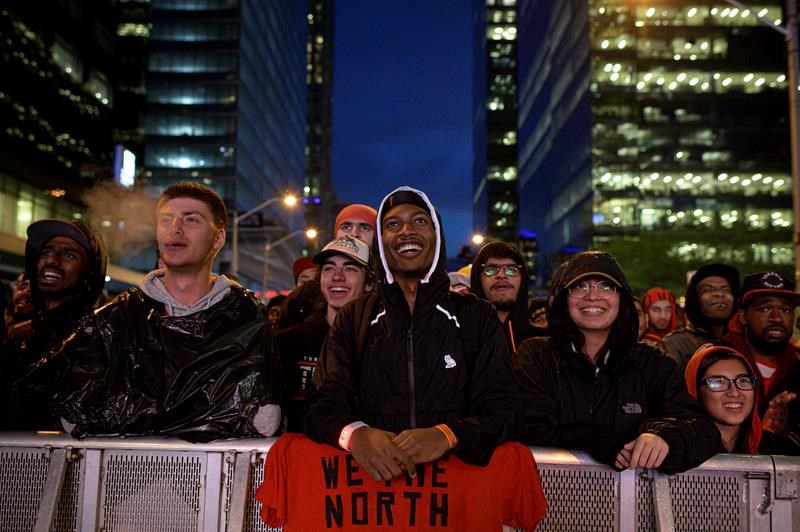 Raptors fans react outside of Scotiabank Arena during Game 5 of the NBA Final between Toronto Raptors and Golden State Warriors in Toronto Monday, June 10, 2019. (THE CANADIAN PRESS/Christopher Katsarov)

TORONTO — The Toronto Raptors, a team whose magical playoff run sparked civic pride and raucous enthusiasm across Canada, sent fans into fits of unbridled joy on Thursday as they beat the reigning champ Golden State Warriors in a see-saw thriller to win the NBA championship.

Thousands of spectators who jammed Jurassic Park, the fan zone outside the team’s empty downtown arena, to watch Game 6 of the finals on big screens — some after waiting hours in pouring rain — erupted in a roar as the final buzzer sounded.

Fans gathered both indoors and at dozens of outdoor venues across the country to cheer on a team from a city many love to hate, their enthusiasm measured by unusually jammed bars.

According to latest figures from payments firm Moneris, spending in bars nationally jumped 63 per on Monday from the same day a year ago, when the Raptors lost a Game 5 nail-biter by a single point. The biggest increase was in Edmonton, which saw spending jump a whopping 279 per cent. Spending in Toronto area bars almost doubled.

“It’s difficult to put into words what this means to me, but my love for my son — and the Raptors — is off the charts,” said John Drzazga, 41, of Grimsby, Ont., whose 10-year-old son Dustin spent the first part of the game roaming the zone in an inflatable dinosaur suit with a two-metre tail.

Cities across Ontario held packed viewing events, as did many other places from coast to coast, such as Halifax, which threw a massive outdoor block party.

Montreal shut down two city blocks to allow the improbable: people cheering a team from Toronto. Thousands braved the rain, forming a red tide, with organizers handing out “We the North” T-shirts.

One man was booed when he showed up wearing a blue Warriors T-shirt but he ripped it off to reveal a Raptors jersey. The Warriors shirt was set on fire, burning until police moved in to extinguish it.

Fans in Regina, as they did on Monday, watched on the massive screen at the Roughriders’ home stadium, while those in Edmonton headed to the Edmonton Expo Centre.

Even in Rickford, Ill., hometown to Raptors star Fred VanVleet, fans began their party at 6 p.m. at the newly created Jurassic Park RKFD to take in their local hero.

“Fred is an amazing basketball player and a genuinely good person both on and off the court,” Rockford Mayor Tom McNamara said. “We’re excited to support him as he works to bring home an NBA championship.”

In Oakland, Calif., where the Warriors hosted the Raptors, cheers erupted in Oracle Stadium as Canadian singer-songwriter Sarah McLauchlan performed O Canada and Pat Monahan, of pop-rock act Train, sang The Star Spangled Banner before the game got underway.

The championship win by the Raptors marked the first for a Canadian team in one of the big four professional sports since the Toronto Blue Jays won the 1993 World Series and the first NBA team outside the U.S. to go all the way.

“I remember coming here as an immigrant from Sri Lanka in 1989 and we watched Joe Carter hit that home run for the Jays,” said Subi Mahan, 37, of Pickering, Ont., who was with his two boys, Kiyan, 6, and Kishan, 9. “(So) to be here and share this with my boys is amazing. This is what love is.”

Outside Christchurch, New Zealand, a Canadian flag hung on a suburban fence emblazoned, “Let’s Go Raptors” and “We the North.”

Love of the Raptors, with their best performance in their 24 seasons, prompted Toronto Mayor John Tory to don his now-signature black-and-gold blazer to visit the gathering crowd Thursday.

“It is beyond comprehension that people could be down here, huddled under these makeshift tents, for hours on end, more than a day, overnight,” Tory said. “It’s cold, it’s rainy, it’s been such a terrible spring, but they’ve been here week after week, day after day, and they’re the greatest fans in sports.”

-With files from Ugo Giguere in Montreal